In late October 2012, Elvin Flores, an artist receiving services through AHRC NYC’s Joseph T. Weingold Day Services exhibited his artwork at the 63rd Annual NYSARC, Inc. Convention in Albany.  This exhibit was made possible by a grant from NYSARC, Inc., which supports artists supported by agencies such as AHRC New York City.  Elvin’s artwork was admired by convention attendees, and he was able to share the experience with his stepfather, who joined Elvin during the exhibit. 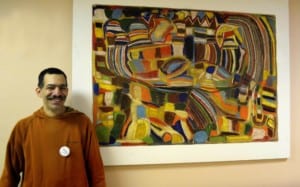 Elvin Flores with his artwork at the Joseph T. Weingold Day Services in Woodside Queens

Over the years, Elvin has used countless mediums for making both two and three-dimensional art, ranging from pastels and watercolors to sculpture and spray-paint, often depicting imagery related to his home in New York City, and to also Puerto Rico, where he spent a lot of time as a child.

Elvin’s sketchbook series consists of drawings in which he fills in large abstracted figures with pen in painstaking detail until they are completely solid; he can spend days on just one sketchbook page of this kind. While the process may be time-consuming, the result is a flow of textures and patterns that are captivating.

When asked where the inspiration for these works comes from, Elvin says, “I made it in my head. It’s in my imagination.” Elvin’s work has appeared in various community exhibitions, including public libraries and galleries such as Topaz Arts in Queens.

A Family’s Experience from the NYSARC Convention

After the 63 Annual NYSARC, Inc. Convention, Elvin’s step father wrote about their experience at the exhibit, adding some thoughts about Elvin’s involvement with AHRC New York City.  The text of the letter appears below:

My wife Millie, our son Elvin, and I have been AHRC members for many years.  Elvin attends the Joseph T. Weingold Center in the Woodside neighborhood of Queens.  He has been a participant there for nearly two decades, and Elvin has a deep commitment and loyalty to his friends and the staff there.

Last week, Elvin was the recipient of a very special invitation to attend the annual NYSARC Convention in Albany.  Elvin was chosen to exhibit his artwork at the convention.  This is artwork that he has created over several years at the Weingold Center, under the guidance of his wonderful teacher, Jason Cina. 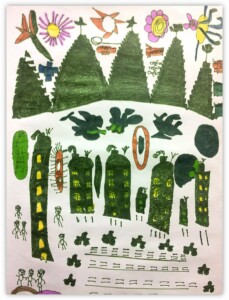 An Illustration by Elvin Florez

Elvin has long been interested in drawing and has enjoyed creating pictures for his family for special occasions.  But our realization of his growth as an artist at the Weingold Center has dawned on us in stages.  About five years ago, Elvin painted a beautiful picture in bright colors that he entitled the Indians.  It was part of an exhibit at Pace University in downtown Manhattan.  I worked directly across the street from Pace University, and several of my colleagues at the time attended the exhibit with me.

Then several years ago Jason arranged with a local Woodside gallery to display the artwork of members of his class at the Weinberg Center.  Elvin had a large canvas prepared in pastels in the show, which also included sketchbooks showcasing the work of many of the artists including Elvin.

For the exhibit at the NYSARC Convention in Albany, three of Elvin’s large ink drawings were displayed.  The drawings had been beautifully framed for the occasion.  There were also two pieces of sculpture, one utilizing a balloon and paper mache, and the other wood and wire, among other materials.  And visitors to the AHRC exhibit also could look at his sketchbook.  Elvin and I rode the Amtrak train to Albany and took in the colors of the fall foliage along the way.  We walked around the historic government section of Albany before the conference.  And we enjoyed our stay at the Hotel Albany, site of the convention.  On Friday, Elvin greeted visitors to AHRC’s booth, showed them his art, and answered their questions.  Many people encouraged him to keep practicing and producing his work.  I was there to help our visitors “meet the artist”.

To say that this was a dream come true for us would be an understatement.  Elvin feels very much at home at the Weingold Center where he has done much productive work over the years.  In addition, to have his artistic talent recognized, nurtured and developed is truly special.