AHRC New York City offers FREE free workshops to families of people with intellectual and developmental disabilities through its Family Education Series, designed to educate and inform those who are directly affected by the changes to our field and for people who want to learn strategies to best serve and care for their loved one with a disability.

The workshop series runs from October until June. At the second to last session of the 2016-17 season, over 30 people gathered at AHRC NYC Headquarters penthouse for a frank, honest, and informative discussion about Dating, Sex, and Disability led by Dr. Danielle Sheypuk. “These are three words that don’t often go together,” Dr. Sheypuk said. 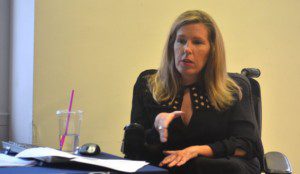 Dr. Sheypuk speaks from experience. She has cerebral palsy and began the workshop by explaining her backstory. Throughout her formative years, Dr. Sheypuk expressed a desire to date and have a “normal” sexual lifestyle, but was constantly discouraged by both her family and her peers. “The fact that we have the same emotional and physical needs as the rest of the population is always swept under the rug,” said Dr. Sheypuk.

She decided to try online dating but was dismayed to learn that her friends without disabilities were finding many more matches and dates. While looking for advice, Dr. Sheypuk found inspiration from an unlikely source-the TV show Sex and the City. “Who’s my Carrie Bradshaw in a wheelchair?” Dr. Sheypuk asked herself.

Shortly thereafter, she heard about the Ms. Wheelchair New York pageant. “It was the first time I heard glamor and disability in the same sentence,” she recalled. Dr. Sheypuk won, and it led to her getting some of the first runway modeling jobs for people with disabilities. Through these experiences and her educational background in psychology, she has become one of the leading experts in sexuality, disability, and how the two are intertwined.

Dr. Sheypuk then sought to dispel some common myths about people with disabilities and sex, as well as give advice to concerned family members. “People assume we’re asexual, that we aren’t capable of being a wife and mother or husband and father,” she explained. She said that families too often assume that children with disabilities won’t grow up to be sexual adults, so the issues of sexuality are never discussed with them; Dr. Sheypuk indicated that this is dangerous, and has thus led to a rise in the rates of unwanted pregnancies, sexually transmitted infections, ineffective OB/GYN and urology care, and more in the disability population.

Despite the discomfort family members may have about broaching the subject, Dr. Sheypuk urged them to openly and freely discuss dating and sexuality with their loved ones. “Talk about sex like you’re talking about where to go for dinner,” she said. She also encouraged those interested in using online dating to stick to the mainstream sites, as the ones that cater exclusively to people with disabilities are often ineffective.

Some family members attended a workshop for the first time; others had been to previous sessions but were intrigued by the subject matter.

“I’ve been to a couple in the past, and my son was at one point received services from AHRC,” Randi Puccio said. “The dating part is why I wanted to come tonight; I’d previously been to one about housing and I thought it was interesting. I’d just like a little more education in terms of where to go to date in a safe manner. As you get older it becomes harder, especially in New York.”

AHRC NYC Board Member, Germaine Laviscount Scott urged family members to not only continue attending Family Education Series workshops but also to become a member of AHRC NYC. “I got into AHRC almost by accident,” she said. “But once I was there and I met other parents who were feeling the same way I was, who were stressed about the same thing I was, and who were finding solutions for our common problems, I knew this was the place for me. Whatever you do for AHRC, you’re really doing it for your loved ones.”