Everyday Heroes, (EH,) is an initiative through which Direct Support Professionals engage in professional development while supporting the goals of people supported through AHRC New York City’s Day Services and Employment and Business Services programs.  The latest round of EH began in late October 2013, when ten Community Support Professionals, (CSPs,) were selected to participate as Heroes in the program.  Early in the process, each Hero identifies a Partner, a person receiving services through one of AHRC New York City’s programs.  They also choose a fellow staff member to act as a Mentor and together they employ Person-Centered Planning, to assist their Partners in identifying and reaching a particular goal.  While working toward the chosen goals, the Heroes receive professional development through educational experiences.  They engage in discussions about the role of the DSP, through sessions provided by the Direct Support Professional Alliance of New York and the National Alliance of Direct Support Professionals. Additionally, the Heroes practice their public speaking skills while receiving tips from Anita Jackson, Office Administrator, Day Services, who has over 20 years of training with Toastmasters International, and who shares helpful techniques for developing confidence, and improving gestures, language, organization, vocal variety, and eye-contact.  AHRC NYC staff members, Steve Williams and Jennifer Teich have facilitated EH training since the initiative was introduced in our organization, covering the curriculum and how it should be applied to provide the best support possible.

As each round of the initiative draws to a close, all of the Heroes, Partners, and Mentors gather together to reflect upon the process of the EH initiative, by presenting stories about their experiences to the group.  On Thursday, March 27, 2014, AHRC New York City hosted an Everyday Heroes Luncheon in the lobby of the historic Emigrant Bank Building in downtown New York, where ten CSPs made presentations about their experiences in the initiative. 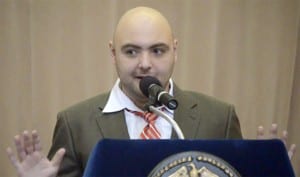 Tashi Choephel supports Anthony Schobot through services provided at AHRC NYC’s Joseph T. Weingold Day Services.  In his role as a CSP, Tashi makes sure to learn as much about Anthony’s favorite activities and goals, so he can provide the best support possible.  “Every day Anthony makes me feel that I could do something for him,” said Tashi, addressing the audience.  “I have known Anthony for almost two years, and through this journey, I have known him even better. Anthony is a man of many talents, interests, and hobbies.  I see in him, an immense potential.” 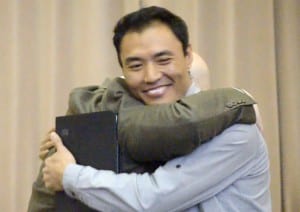 For Tashi, supporting Anthony’s dreams often means connecting him to experiences that will help him to learn and grow. Anthony is currently writing an autobiography, including stories of his friends, family, and experiences at church. In order to learn more about the writing process, Anthony has been attending writing workshops. Anthony’s goals also include becoming a strong self-advocate, and he is learning how to do so through his attendance of SANYS U, the school of self-advocacy, where he talks about his dreams and aspirations, which include exercising more, pursuing employment at a local movie theater, meeting celebrities to collect their autographs, and exploring places in New York City that appeal to him, including Planet Hollywood, the NBC Universal store, and local comic book stores. Tashi presented a video about the steps Anthony is taking in pursuit of his goals.  Afterward, Anthony thanked Tashi, his family, and staff from Weingold ADC who have supported his efforts to achieve his goals.

Carlton Walton, CSP, William F. May Day Services, displayed a video slideshow about his work in the support of Shadath Chowdhury, who aspires to find employment. “In my role as a CSP, I am supposed to be supporting people,” said Carlton, “and I think it’s very important to look for the qualities [in a person who you support] that can help them to be more independent of you [the service provider].” 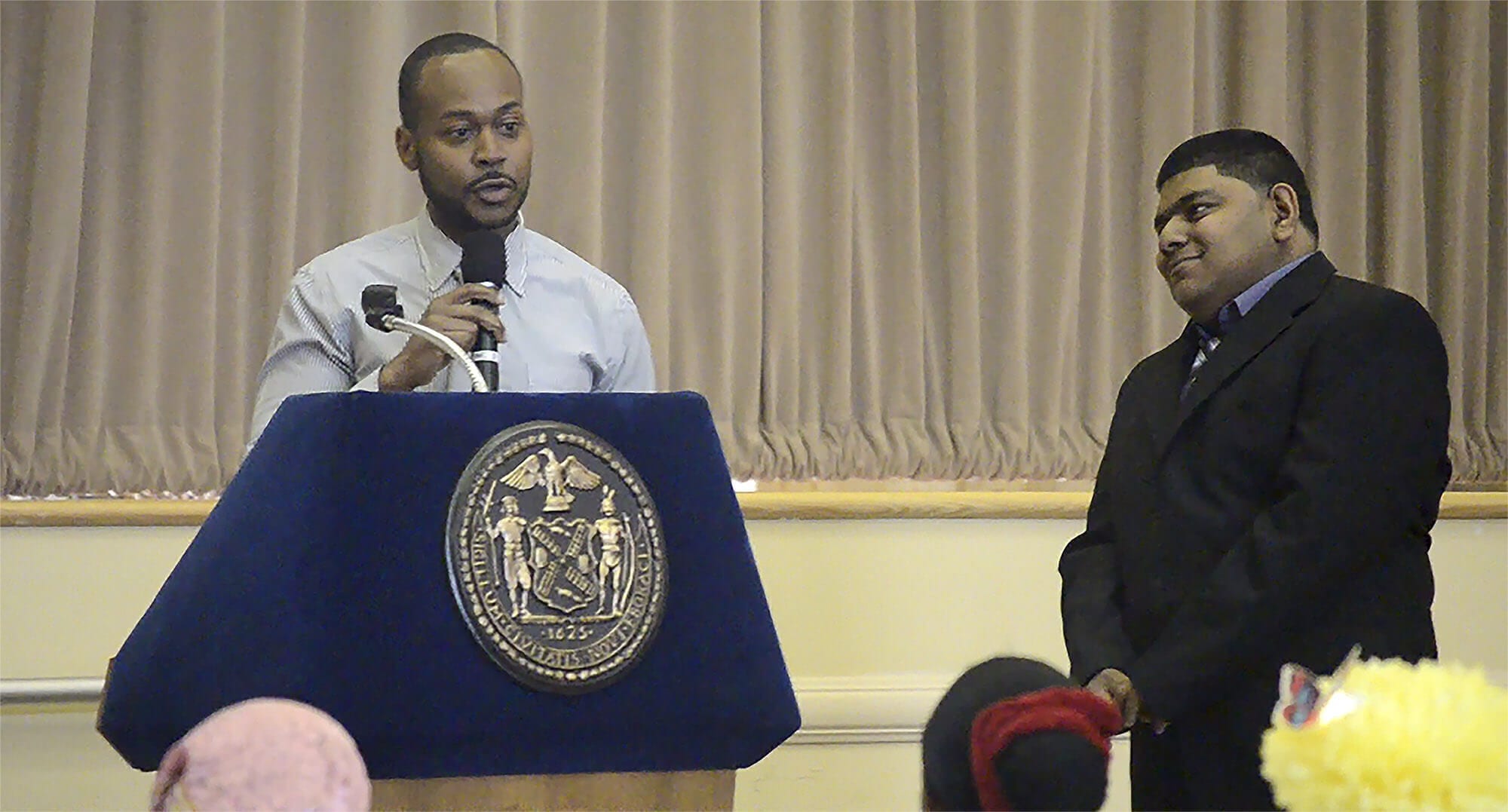 Shadath enjoys math and has set a goal of finding employment that would allow him to use this skill while earning a good wage. While supporting Shadath in reaching his goals, Carlton emphasizes the importance of leading and learning together.  There may be times when a CSP may believe that he or she knows best when it comes to choosing the activities of a particular day or the steps in reaching a particular goal, but Carlton looks for opportunities for Shadath to take the lead in making the types of decisions. “He knows exactly what he wants, and together we work it out,” added Carlton. 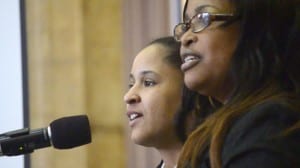 One notable aspect of this round of EH presentations was the wide variety of approaches that were implemented as the stories were presented.  In the case of one presentation made by Carla Williams, who supports Venecia Septimo through AHRC NYC’s Howie Stone Day Services the presentation took the form of a play.  “She [Venecia] is a self-advocate who loves the law,” said Carla while introducing Venecia.  “She is confident and responsible, friendly and respectful, passionate and motivated, bilingual in Spanish and English, a beautiful and dynamic woman.”

Through her relationship with Venecia, Carla has learned that Venecia has a dream of becoming a lawyer.  In November 2013, Carla helped Venecia to learn more about the courtroom experience by accompanying her to witness a real case as it was in session.  In order to share the courtroom experience with others, Venecia, Carla, and others attending the EH presentation took part in a mock trial about a stolen car, which was acted out in front of the audience, using a script of the proceedings of a typical courtroom case. 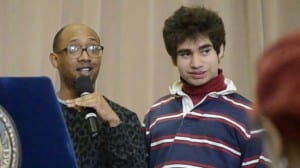 Nerik Elliot, CSP, Day Hab Without Walls, has a passion for dance, movement, and meditation. Early in his career as a CSP, Nerik met Gabe Macaya, and witnessed him practicing yoga and meditation. Since that time, Nerik and Gabe have used meditation and movement techniques to focus on the present moment. “Meditation has helped to center Gabe in doing his job,” said Nerek. Gabe works as a lunchroom monitor for a school for children with intellectual disabilities, and recently, he increased his workdays to five per week.

A one-minute mediation exercise was demonstrated during the presentation, with Gabriel instructing attendees in a technique that he has found to be helpful for relaxation.  “First, take a deep breath through your nose,” said Gabriel. “Breath out through your mouth, and repeat three times. Just listen to whatever you hear.”

AHRC New York City thanks the trainers, mentors, heroes, and partners who participated in this round of the Everyday Heroes project, for working toward the achievement of dreams, for sharing their stories, and for the community connections they foster each day.  Additionally, we thank Victor Calise, Commissioner of the Mayor’s Office for People with Disabilities, who kindly arranged the use of the Emigrant Bank Building for the purpose of celebrating these Everyday Heroes, and who visited to address the attendees of the event.