For over a decade, Pace University has partnered with numerous AHRC New York City programs in its biannual service learning projects. Led by Dr. James Lawler, each student in the class is paired with an AHRC NYC partner as they work together to create a custom website highlighting his/her talents, skills, and interests.

“I was contacted by AHRC NYC Board Member Marilyn Jaffe-Ruiz in 2005 to help Darinka Vlahek; she [Marilyn] was (and is) my advocate for community service with disadvantaged populations, supported by Pace University,” said Dr. Lawler. “I began the community engagement curricular and extra-curricular programs for AHRC NYC beginning with Day Services,” he continued, adding that the project has since expanded to multiple AHRC NYC departments and facilities, including Employment and Business Services and AHRC Middle/High School. To date, 1,028 Pace students have worked with people from AHRC NYC programs, according to Dr. Lawler. 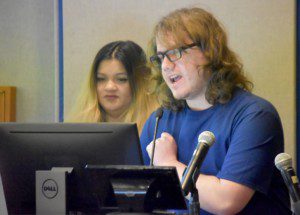 Will Peters spoke about his acting roles as his Pace student partner, Nabila Musharraf, listened in.

Will Peters and his student partner Nabila Musharraf created a website focused on Will’s acting aspirations. It includes his resume, photographs of his performances, past acting roles, original scripts, and upcoming roles. “The project was very productive and I got what I wanted out of the website,” Will said. “At the end of the day, I took a lot away from this semester. I don’t where I’ll be in the future but one thing is for certain—I will be updating this website as life goes on.”

John Lipari was paired with Dylan Smyth. Their collaborative website showcased their mutual interest in performing music. The site features John’s two original singles and a music video filmed at his home.

“We are both musicians so that is why we were paired together,” Dylan said. “I learned a lot from working with John. We both chose the background of the city [for the website] because what better place is there to play music than New York?”

Pace’s Svend Trusso worked with Timothy McGillivary to highlight the latter’s artistic talent. “We loved walking around the Pace campus and view paintings together,” Svend said. “Some of the paintings were from galleries in my hometown. It was great to get to know Timothy this way.”

Partnering with the Loisaida Center

A number of students and their AHRC NYC partners worked closely with the Loisaida Center in creating their websites. The Losaida Center is a community organization that seeks to “address the serious economic and social disenfranchisement of poor and low-income Latino residents, with employment and training opportunities…as well as neighborhood revitalization activities that positively highlight the rich culture, heritage, and contribution of the Puerto Rican and Latin American community in this City.” 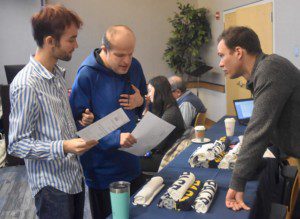 “The partnership between AHRCNYC and the center started in the summer of 2017,” said Jonathan Epstein, Transition Developer. “Lori Hagopian, an AHRCNYC mixed media teaching artist, needed space for a workshop she has been providing to artists from ADS programs and had a pre-existing relationship with Loisaida Center. Libertad Guerra, Director; Andrea Gordillo, Program Outreach Manager; and Alejandro Epifanio Juan, Project Manager/Technology & Design, have been extremely welcoming and accommodating to the artists AHRC NYC supports.