Digital Storytelling Enhances Self-Expression for Individuals on the Autism Spectrum

At AHRC New York City, digital storytelling is enhancing self-expression for individuals on the autism spectrum through a community service-learning partnership with Pace University. AHRC New York City is a large, family-governed, nonprofit organization that has been serving individuals with intellectual and other developmental disabilities (“IDD”) for over sixty years. Individuals on the autism spectrum are integrated into the more than twenty Day Service programs located around the city and comprise the overwhelming majority of the one hundred and twenty students who attend AHRC New York City’s Middle High School in Brooklyn.  AHRC NYC’s overarching commitment to technology is founded upon the belief that technology is currently part of everyone’s everyday life and provides opportunities for individuals not only to participate more fully in daily activities but also to explore their identity, enhance self-expression and increase independence. The Pace University community service-learning partnership provides a platform for individuals on the autism spectrum to use mobile technologies to expand their communication, social, and technical skills while becoming integrated members of their communities.

Since 2007, digital storytelling has been the focus of AHRC New York City’s service-learning partnership with Pace University.  Individuals on the autism spectrum from both AHRC NYC’s Day Service programs and Middle High School are engaged in person-centered, digital storytelling projects where technology, and more recently, mobile technology, is used to enhance self-expression by showcasing talents, ambitions, and dreams. Dr. Jim Lawler, organizer of the partnership and Professor of Information Technology and Service-Learning at Pace’s Seidenberg School of Computer Science and Information.

Systems says that this collaboration using “mobile technology is giving individuals on the spectrum a critical edge in pursuing learning opportunities and life options, in partnership with enthusiastic and passionate undergraduate students of the university.” Yuliya Khripunkova, an AHRC New York City Transition Developer, assists in pairing AHRC individuals with Pace students according to similar interests and talents. Each semester, classes meet weekly at the Seidenberg computer labs at Pace Plaza on Tuesdays and at the facility labs at the Middle High School on Fridays for semesters of fourteen weeks.  The digital, person-centered projects being worked on are directed by the individuals from AHRC New York City. A multi-media presentation of the productions of visual storytelling is a course requirement, and at semester-end, all projects are viewed by an audience that includes the Pace students, AHRC individuals, their peers, and staff. 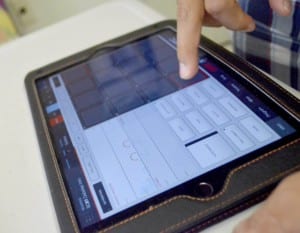 Mobile technologies allow people a means by which to express their unique interests.

Digital storytelling is a powerful tool for self-expression for individuals on the autism spectrum and success stories abound.  A young man of Chinese heritage was proud to introduce his Pace partner to the Chinese culture. They organized a trip to Chinatown, ate lunch together, and made an iMovie about their experience. At the end of the semester, their iMovie, captured the sights and sounds of Chinatown and was enjoyed by all. Another young man with a passion for music and coffee, wrote a song about coffee, used the Garage Band app to create and record the music instrument by instrument, and further incorporated the song into a slide presentation using the Keynote app. Technology not only facilitated his ability to express his passions but also empowered him to share those passions with others. In the past, a young man initiated an animation project by drawing cartoons on paper. He was then provided a Wacom Bamboo tablet, a sophisticated, touch-sensitive device that works with imaging software such as Photoshop. When mobile technologies arrived on the scene, the story was transferred onto an iPad where an animation app totally revolutionized the project. In fact, the characters in the story had then morphed from superheroes into a self-portrait. Talk about self-expression!  The Keynote app was also used by a young woman to design a brochure describing her ideal workplace-a daycare center. Another young woman, who attends an AHRC New York City Career and Community Studies Program located in a local community college, also participates in the Pace program.  She has a passion for self-advocacy and her current iMovie is a face-to-face, sit-down talk with her audience. She encourages her audience not to be defined by their disability and also recites a poem she wrote expressing her thoughts on what being “normal” is all about. Additional digital stories include short biographies that showcase talents such as expressing love for show tunes (and singing a few), or drawing and displaying sketches.

We all have “stories” to tell. Through the AHRC New York City and Pace University Service-Learning partnership, we anticipate more individuals on the autism spectrum will have the opportunity to tell their stories in the coming years.

AHRC NYC’s overall commitment to technology is evident in the computer labs, laptops, Smartboards, large flat-screen TVs, and both low-tech and high-tech communication devices used daily in various environments for diverse purposes by individuals on the autism spectrum as well as individuals with other intellectual and developmental disabilities. Snoezelen rooms allow individuals to experience a relaxing, multi-sensory environment. Nintendo Wii, Wii fit, Exergaming equipment, and fitness bikes permit users to have fun while keeping fit. GPS technology has been used by many individuals to assist them in becoming “travel trained,” a very empowering achievement and a skill that increases community success and social independence.  Mobile technologies, particularly iPads, are extremely popular and the ever-expanding universe of apps allows individuals a means by which to express their unique interests as well as meet their particular needs.