The luncheon was chaired by Michael Hutmaker, Dean for Student Affairs, and Nicole Leach, Assitant Director of BMCC’s Office of Accessibility. Additionally, Melissa Riggio Higher Education Scholarship Awards were given to Mentors and BMCC Alumni Esmeralda Bretoux and Gabrielle Richards.

“When I was in high school as a kid, I dreamed of going to college,” said Sean Brown. “When my parents told me about the Melissa Riggio Program, I was very excited to make new friends, go to clubs, and try out new classes. I like being here because I’m treated like an adult with responsibilities to get done.”

Joseph and Shaleen had their artwork showcased around the room. Joseph focuses on drawing, especially skeletal figures, which he said is often inspired by classes he’s taken or community outings.

Shaleen’s artwork is portrait-based, using bright colors to depict everyday poses and scenarios. Both artists said their skills have been enhanced as a result of classes they have taken at BMCC. 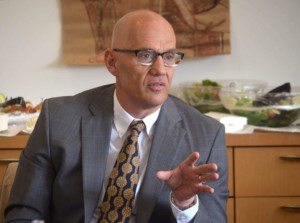 “We’re very thankful for this community at CUNY and BMCC,” said Michael Decker, Chief Operating Officer. “There are 80 Melissa Riggio students throughout CUNY and about 10 at BMCC. It’s emblematic of BMCC, a community college, that when we talk about community, we include people with disabilities.”

Esmeralda is studying Sociology and Gabrielle is studying Psychology and Nursing. Both said that being mentors in the Melissa Riggio Program inspired them to further their studies in fields related to developmental disabilities. 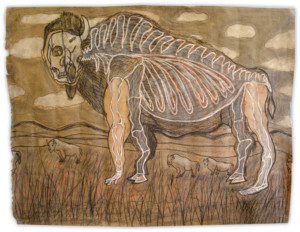 Joseph Limery’s depiction of a Bison

At the College of Staten Island, three Melissa Riggio Higher Education Program students are set to take the next step in their lives following their graduation from the program. Ryan Meinert, Christopher Siani, and Lisa Marie Loesch were all integral parts of the program and showcased their final projects to a large audience of family members, peers, CSI faculty and leadership, and AHRC NYC staff and leadership.

Ife Okoh, Director of the Riggio program and the evening’s MC, said that Ryan, Christopher, and Lisa are the first Riggio graduates to complete a four-year program instead of the previous three-year length.

“Throughout the last four years, we have acquired an education that is only powerful if we share it with others,” Lisa said. “I invited you to do so as we go out into the world to make a difference.”

“You are the pioneers. You’re the first group of students who have come through this four-year program,” Gary Lind, Executive Director, said to the graduates. “The partnership between AHRC NYC and [the College of Staten Island] has opened up a world of experiences for you, and you fearlessly jumped right in to make sure you took advantage of all of it.”

“A Testament to Incredible Work”

Christopher Cruz Cullari, Executive Director of Continuing Education at CSI, extolled the benefits of the Riggio Program from the CSI perspective along with Kenichi Iwama, Vice President for Economic Development, Continuing Studies, and Government Relations, and William J. Fritz, the college’s President.

Also in attendance was Steve Riggio, Secretary/Treasurer of the AHRC New York City Foundation Board of Directors, CEO of Barnes and Noble, and the father of the late Melissa Riggio. “When I joined the Board of AHRC shortly after Melissa was born, over 20 years ago now, we never would have dreamed of seeing a program like this,” Mr. Riggio said. “It has not just come into existence but it has thrived. It’s a testament to the students who have graduated here today and also the incredible work of AHRC and its staff.” The AHRC New York City Foundation-funded each of the Melissa Riggio programs as well as the mentor scholarships.

AHRC New York City is proud to congratulate all of the graduates and scholarship winners!
View BMCC’s coverage of this event. 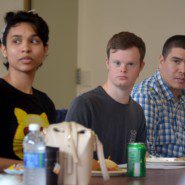 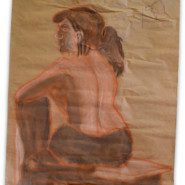 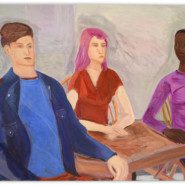 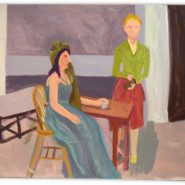 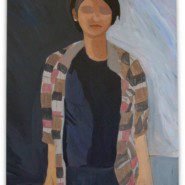 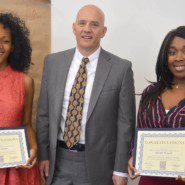 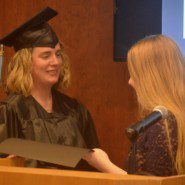 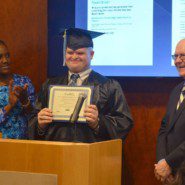 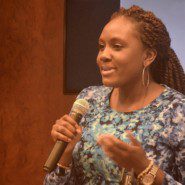 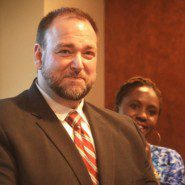 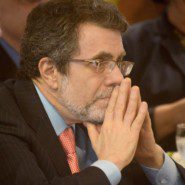 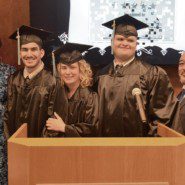