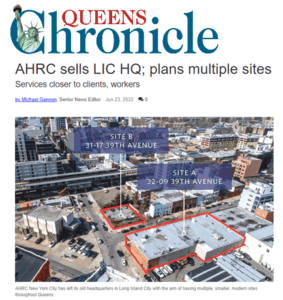 As reported by the Queens Chronicle, AHRC New York City (AHRC NYC), with an eye toward the future, announced the sale of its longtime Cyril Weinberg Center headquarters at 32-03 39 Ave. in Long Island City; and an adjacent parcel at 31-17 39 Ave. All proceeds from the property sale must, under state regulations, be put back into the new sites. AHRC NYC said the decision to sell was motivated by a desire to better serve the people served by the program with smaller, more specialized offerings.

“The strategic decision to sell AHRC NYC’s Weinberg Center supports our mission by giving us an opportunity to become even more focused on the changing needs of the people we support. The Board and leadership team of AHRC NYC decided to take advantage of the booming real estate market in Long Island City and Denham Wolf helped to set us on a path of updating our services and support capabilities, while also now reaching into additional communities in Queens,” said CEO Marco Damiani.