It started will a simple question: “What do you want to do?“. The answer given by a number of people during CQL interviews led to a path of advocacy that will lead the way for others. Self-advocates supported by AHRC New York City were given the opportunity to discuss issues of importance to them directly with legislators, legislative leaders, and the Governor’s staff in Albany this February.

Kristen Thatcher and Paul Scherzinger, both of whom attend or graduated from AHRC NYC’s Melissa Riggio Higher Education Program at the College of Staten Island, were joined by Jessica Giorgio, Higher Education Support Professional, Carmine Cammarata, Community Support Professional, and Al Kaplan, AHRC NYC’s Senior Policy Advisor. At several sessions organized by Carole Gothelf, Director of Individualized Supports, and Matthew Weiler, Program Director at the College of Staten Island and Kingsborough Community College, prior to their trip to Albany, they met to prepare for this exciting opportunity to speak for themselves about their lives and what they as citizens wanted from their legislators. Al Kaplan spent several hours over several sessions advising the group on the logistics of budget legislation, the way government operates, as well as assisting them in understanding how to state their case and the specific issues that are at play legislatively at the current time.

“Legislators pick and choose what issues they focus on, and so do we,” Al explained. “You have things that are a concern to you, and you want the people who represent you to know what they are.”

Al gave Kristen and Paul an assignment to bring to one of the meetings. He asked them to answer three questions:

Kristen, who is 26 wanted to focus her conversation with legislators on employment issues. “I want to talk with them about jobs for people with disabilities,” she said. “I don’t think there are enough jobs and we’re limited in the kind of jobs we can get.”

Paul decided to talk about an issue that was personally affecting him. “My issue is that Medicaid stopped covering my physical therapy after 26 weeks,” he said. “My mom can’t afford to pay for it without insurance.”

Speaking Up for What Matters 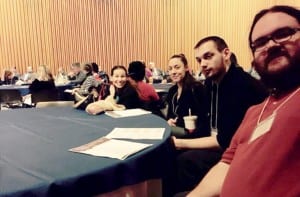 Al encouraged Kristen and Paul to speak more freely, especially when they were speaking about themselves. “When you’re meeting with the legislators, make sure you make eye contact with them,” he advised. “All people respond better when they feel that you are talking directly to them.” Al also suggested areas where Kristen and Paul may want to focus their arguments based on the most recent budget proposals available.

The day finally arrived and Kristen, Paul, Jessica, and Carmine were very excited and nervous. They did exceedingly well in speaking for themselves. They said they were most impressed with the reception they received from State Senator Andrew Lanza (R), who represents most of Staten Island. “He talked a lot about our issues and listened to what we had to say,” Paul said. Sen. Lanza also said that he would specifically follow up regarding Paul’s insurance situation.  “He was relaxed,” Kristen said. “It was just human-to-human talking, we were equals.” 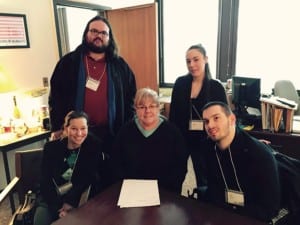 Self Advocates meeting with the Chief of Staff

“I was surprised that legislators did not know about a lot of our issues,” Jessica said. “Al told us though that there are so many issues facing the budget that legislators often don’t know anything other than what they are working on.”

Kristen, Paul, and Jessica said they had a great experience in Albany speaking for themselves and about themselves. Kristen has been up to the state’s capital before but only for conferences and had never met with legislators before, while this was Paul’s and Jessica’s first visit to Albany. They expressed interest not only in going there again but also in lobbying for issues that are important to them in New York City. “I’d love to talk about making subway station more accessible,” Paul said. Kristen has been frustrated with Access-a-Ride and said “They’re not reliable and I don’t feel like they treat people with disabilities with respect.”

Spreading the Word and Helping Others to Speak

“Kristen, Paul, and Jessica did a great job!” Al exclaimed. “They spoke with confidence and clarity about the issues they wanted to talk about. I think they really got their message across to the legislators, and the legislators listened.” They had fun too, spending two snowy nights in a hotel, dining out as a group, and garnering the confidence to do this again and again and to help their peers do the same thing.