Aspiring writers and self-advocates from AHRC NYC’s Staten Island Day Hab Without Walls’ (SIDHWOW,) writing group and self-advocacy group had a unique chance to visit the headquarters of their local newspaper, The Staten Island Advance. Staten Islanders rely on this publication on a daily basis to stay up-to-date with the community, from traffic and transit reports to personal, emotional stories. Executive Editor, Brian Laline gave the group a personal tour of the facility, introducing them to a variety of reporters who were working side-by-side on breaking news, developing stories, intense commentaries, and heartwarming narratives in the newsroom. The first stop of the tour was a luxurious conference room at the building’s top floor.

Laline sat at the head of the table and introduced himself, followed by a brief background of the highly-cherished company and history of investigative news reporting. It was an engaging, interactive conversation that encouraged the group to ask questions. Paul Scherzinger, President of SIDHWOW’s Self-Advocacy Group, suggested for the Advance feature more self-advocacy-related articles and voiced his concern about accessibility on the island and New York City in general. For months, self-advocates have been contacting the city to get a crosswalk added to the intersection of Bay Street and Wave Street due to no traffic light nearby and fast drivers. Many of them cross this street quite often throughout the week and worry about their safety. Thankfully, within the hour of speaking to Laline, he was able to promise that he will contact the right person to get this crosswalk project started.

“Brian mentioned that the newspaper is changing and the news is slowly going to be online. It makes me worried about newspapers going extinct. The Staten Island Advance is very important to me because my mom can’t get the news online. She needs the actual paper to stay in touch with Staten Island,” stated Christina Velonis, a member of SIDHWOW’s Self-Advocacy Group.

What left a huge impression on the visitors was the mega-sized press room. It’s not only the birthplace of every issue of the Staten Island Advance but a site where several other publications are printed, including the Daily News. Laline explained the process of how print is formed with full detail, pointing out vintage conveyor belts and high-tech computer rooms, as well as showing them newspapers fresh off the press.

Witnessing the making of their beloved newspaper inspired some to contribute to the Advance when they creatively write during Writing Group. The group plans to keep close contact with Brian Laline and The Staten Island Advance family, building a meaningful connection and getting closer to our community. 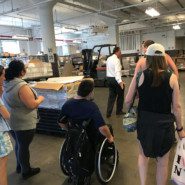 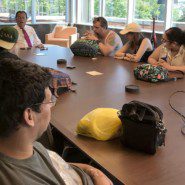 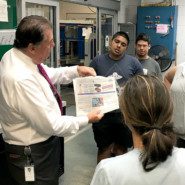