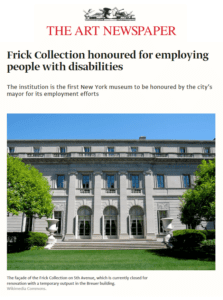 As reported by The Art Newspaper, the Frick Collection in New York has been honored with the Sapolin Accessibility Award for Employment, an annual award that recognizes private and public organizations working to enhance the inclusion of people with disabilities in the workplace. The institution is the first New York museum to be honoured by the city’s mayor for its employment efforts.