National Direct Support Professional Recognition Week is Sept. 11-17. It is designed to spotlight this dedicated workforce which supports people with intellectual and developmental disabilities in every setting, including homes, workplaces, schools, and communities. They are the backbone of the field. Analissa Williams is among the thousands of dedicated DSPs in our organization.

Campers of all ages at AHRC New York City’s Camp Anne have enjoyed bonding with Analissa Williams’ pets for the last two summers.

Williams never went to college or had been away from home. Williams has found a second home at the camp thanks to AHRC NYC’s Advance & Earn which pays qualified New York City residents between 16-24 to earn their high school equivalency and train for a career with paid internships.

She’s a perfect fit for the camp’s nature team, along with her colony of 10 Madagascar hissing cockroaches; her oldest tarantula, Thor; and her 13-year-old bearded dragon, Gizmo. The rest of her menagerie, including seven cats and two pigeons, all rescues, live in her family’s Silver Lakes home. Her pets are a hit at Camp Anne, which is open to people with intellectual and developmental disabilities from age 5 through adulthood.

“I didn’t have a plan when I was in high school,” Williams said. After dropping out, she worked three years at Starbucks and two years at Home Depot. “During the pandemic, I felt it was time to take a minute to focus on myself and finally get my high school equivalency.”

The Advance & Earn teachers were supportive and helped her when she had to stop attending class. “So, when I returned, they said, ‘you’re back and that’s all we care about,’” she recalled. “If you’re unsure what you want or how to achieve it, they will help you, showing you options or paths. It’s the most comfortable setting I’ve ever been in.”

Finding a Home at Camp 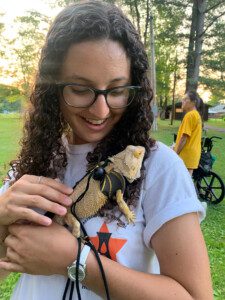 As soon as she set her eyes on Camp Anne, she knew she wanted to work there. “I love being outdoors and being with nature,” Williams says. “I want to keep coming here as long as they let me.”

Williams took time off from her full-time job at Lowes, where she works overnight.

Introducing campers to her pets and other animals gives campers an appreciation of wildlife. “When they see them up close and if they’re brave enough to hold or touch them, there’s a real wow factor. I hope it makes them more curious and open to my fuzzy and nice creatures and instills some love and compassion for the weirder animals.”

Michael Rose, the longtime Camp Anne Director, has filled several positions thanks to Advance & Earn. “They have brought a different type of energy,” he said. “The camp also has opened their eyes to a new experience that they didn’t know existed.” Rose calls Williams a natural. “She really upped our game with our nature program,” he said.

At 25, Williams says she’s learning about herself while supporting campers of all ages and abilities. And of course, she gets a little help from her friends – Gizmo, Thor and the Madagascar hissing cockroaches.