AHRC New York City leadership, staff members, and families joined with advocates from across the country to support disability rights as part of the 2022 Disability Policy Seminar in Washington D.C. The seminar concluded with a rally at the Capitol Reflecting Pool featuring self-advocates, parents, and legislators coming together to express the importance of maintaining and expanding home and community-based services (HCBS).

Throughout the week, advocates from AHRC NYC met with Congresspeople representing constituents impacted by disability services. Legislators included Carolyn Maloney, Grace Meng, Adriano Espalliat, Mondaire Jones, and Senator Chuck Schumer. The advocates spoke on the need for an official job classification for Direct Support Professionals and passing a form of the Build Back Better Act to boost the care economy while also urging Congress to fully fund special education programs and ensure a robust Medicaid system that provides access to HCBS.

“We’ve seen tremendous success supporting neurodiverse people in this field over the last 50 years since the Willowbrook expose,” said Marco Damiani, CEO of AHRC NYC. “There needs to be recognition of the people that devote their lives to supporting others and for them to be seen as valued members of their community.”

Workshops at the Disability Policy Seminar provided further context and tied personal experience to the actions the federal government can take to work towards equality for people with disabilities. 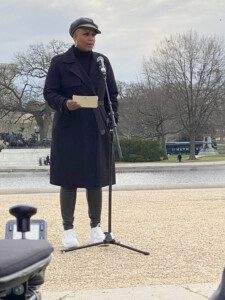 Several speakers spoke about the inequities built into the Supplemental Security Income (SSI) and Social Security Disability Insurance (SSDI) systems. Though both programs are meant to support people with disabilities with fewer independent resources, draconian asset limits, outdated income calculations, and unfair marriage and employment regulations often consign people to a life of poverty—the exact opposite of the programs’ stated purpose.

One speaker said “It’s unfair that people with disabilities either need to live apart or not have jobs to get benefits.” Another added “It’s like they want you to work, but they don’t want you to be on Social Security [if you do work]. You’re damned if you do and damned if you don’t.”

Specific legislation that Congressional representatives can support to improve outcomes for people with disabilities includes the Better Care Better Jobs Act, the IDEA Full Funding Act of 2021, the Keeping All Students Safe Act, the 21st Century Assistive Technology Act, and the Recognizing the Role of Direct Support Professionals Act.

Anne Gordon, a Staten Island-based mom to son Christian and a longtime AHRC NYC Board Member, said, “Being the parent of a child with a disability means a lifetime of worrying because you know your child will grow up not being able to care of themselves. We’re scared to die because we need to know that these agencies will be here when we won’t be.” 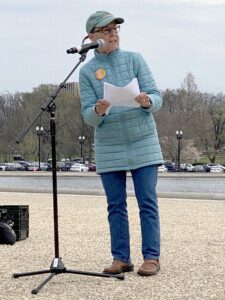 Laura Kennedy, who also serves as a Board Member of The Arc of the United States, said that her daughter Julia’s residential staff members deserve more recognition and compensation. “We trust them with Julia’s life. That trust has been well-earned. The job description for direct care staff does not meet the important work that they do, and we need our champions in Congress to push forward with more resources.”

Germaine Laviscount-Scott, AHRC NYC Board Member, told the office of her representative, Adriano Espaillat, that she feels fortunate to have her son Gregory cared for by dedicated professionals. Other parents need to have that same security.

“What is going to happen to Gregory when I’m not here anymore? The people who work with him have to be around him for a while to understand what makes him tick. For the work they do for someone like Greg—he needs help with eating and bathing, and he cannot speak to them—they deserve better pay.”