As part of 2021’s Transgender Awareness Week, occurring each year between November 13-19, members of the AHRC New York City community attended two webinars discussing the rights of transgender people in New York State and perspectives on disability and sexuality. Transgender Awareness Week is observed to celebrate and educate around the contributions of trans people to our culture, leading up to the Transgender Day of Remembrance on November 20th, honoring the lives of those lost to transphobic violence.

Marco Damiani, CEO of AHRC New York City said, “Transgender Awareness Week helps raise the visibility of transgender people, and address issues members of the community face. At AHRC NYC, we not only strive for full inclusion and participation of people with I/DD in local communities but very importantly, we commit to the same culture for our workforce and for other individuals engaged with our daily work. Transgender people contribute greatly to the diversity and strength of our organization, as well as throughout New York City and the nation.”

A Conversation About GENDA

Senator Brad Hoylman said that GENDA was a correction to the state’s 2002 Sexual Orientation Non-Discrimination Act, which specifically left out protections for transgender people at the behest of some legislators. “This forced us to divide our community, which was unacceptable then and unacceptable now,” Senator Hoylman said.

Earlier in the day, Governor Kathy Hochul announced the signing of two additional bills meant to further protect the rights of transgender people—the START Act, which relates to vacating convictions for offenses committed due to being a victim of sex trafficking, labor trafficking, and compelling prostitution, and a bill requiring utility companies to allow customers to use their preferred names and pronouns.

Teri Wilhelm from Equality New York said that GENDA standardizes non-discrimination law across the state. They said that the law is especially helpful for transgender people living in rural areas, where acceptance has often lagged compared to more urban environments. Activist Kiara St. James said that they agreed with Teri about the potential of GENDA but took a cautious approach.

“On paper, it’s illegal to discriminate. On paper, GENDA looks like a victory. But we still have a long way to go to address implicit biases,” Kiara said.

Later Tuesday, the organization Diversability organized a panel featuring four distinguished experts discussing the intersection of disability and sexuality, including people identifying as both trans/nonbinary and with disabilities.

“Intimacy is so many things to me,” said Emerson Wheeler, a fourth-year med student who identifies as trans, autism, and physical disabilities. “Many seemingly little things are actually hugely intimate moments for me. Accepting help is a very intimate thing and it makes me feel very close to my partner.”

Caz Killjoy, an activist and educator, said that the misconceptions surrounding sexuality, disability, and the transgender experience stem from a lack of education. “We get very little if any accurate sex education in schools and then no education about disability,” they said. “Without education, people make assumptions, and they can be very rude.” Multiple panelists said they prefer when people ask what pronouns they would like to use rather than have people jump to their own conclusions.

Members of the AHRC NYC community found the Diversability webinar to be interesting and informative. “I joined this meeting because I am preparing a training workshop for Chinese parents with IDD children on how to talk about sex,” said Bin Feng, whose son, also named Bin, is supported by AHRC NYC programs. “I truly believe sexuality is everyone’s human nature, including anyone with disabilities.

“I am very worried and concerned about my son’s future in relationships or even family life,” Bin said. “Maybe he will not have any chance to date or marry, but I would do everything to make sure he can love and encourage him this is part of his basic rights to love and be loved. I am very grateful those speakers can speak loudly and tell us that we need do more to ensure everyone has the right to love and be loved. These are God-given rights.” 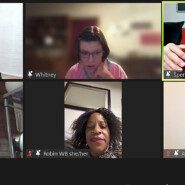 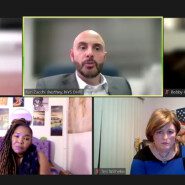