Members of the AHRC New York City family made their way back to the NYC Pride March on Sunday, June 26th after three years away, participating in perhaps the most important pride parade in decades. Recent legal decisions and fears for an uncertain future for LGBTQ rights had parade-goers revved up to fight back against hate, discrimination, and rejection of difference while still engaging in the hallmark joys of the day—unabashed outfits, festive music and dance, and unending comradery. 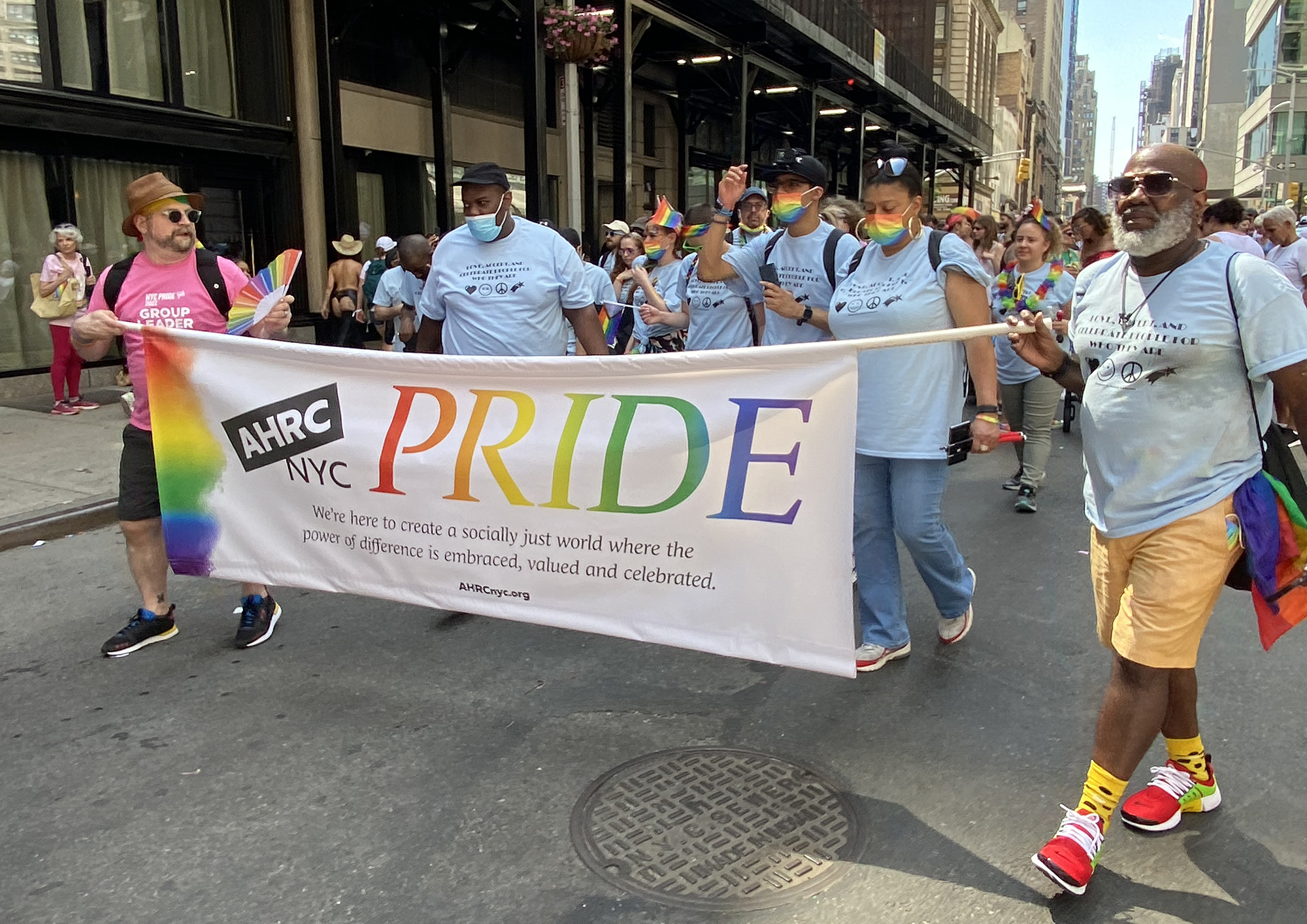 Jason Conover and Darrel Ervin led the AHRC NYC contingent as they stepped off to march.

“Show Respect for Everybody” 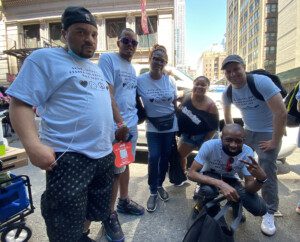 AHRC NYC parade-goers wore T-shirts designed by Michael Carbonaro, a self-advocate who identifies as a gay man. The powder-blue shirts read “LOVE, ACCEPT, AND CELEBRATE PEOPLE FOR WHO THEY ARE,” with heart, smiles, and peace logos underneath, inspired by a recently out LGBTQ media personality that Michael admires.

For Keyshawn Fryar, loving and accepting meant showing up to lend his support to LGBTQ New Yorkers so that others could follow his lead.

“I want to show my respect to everybody and represent my neighborhood,” Keyshawn said. “I feel my friends look up to me and I want to set an example for them. Everybody is equal as New Yorkers. Straight, gay, it doesn’t matter who you are, you just have to respect one another. New Yorkers stick together.” 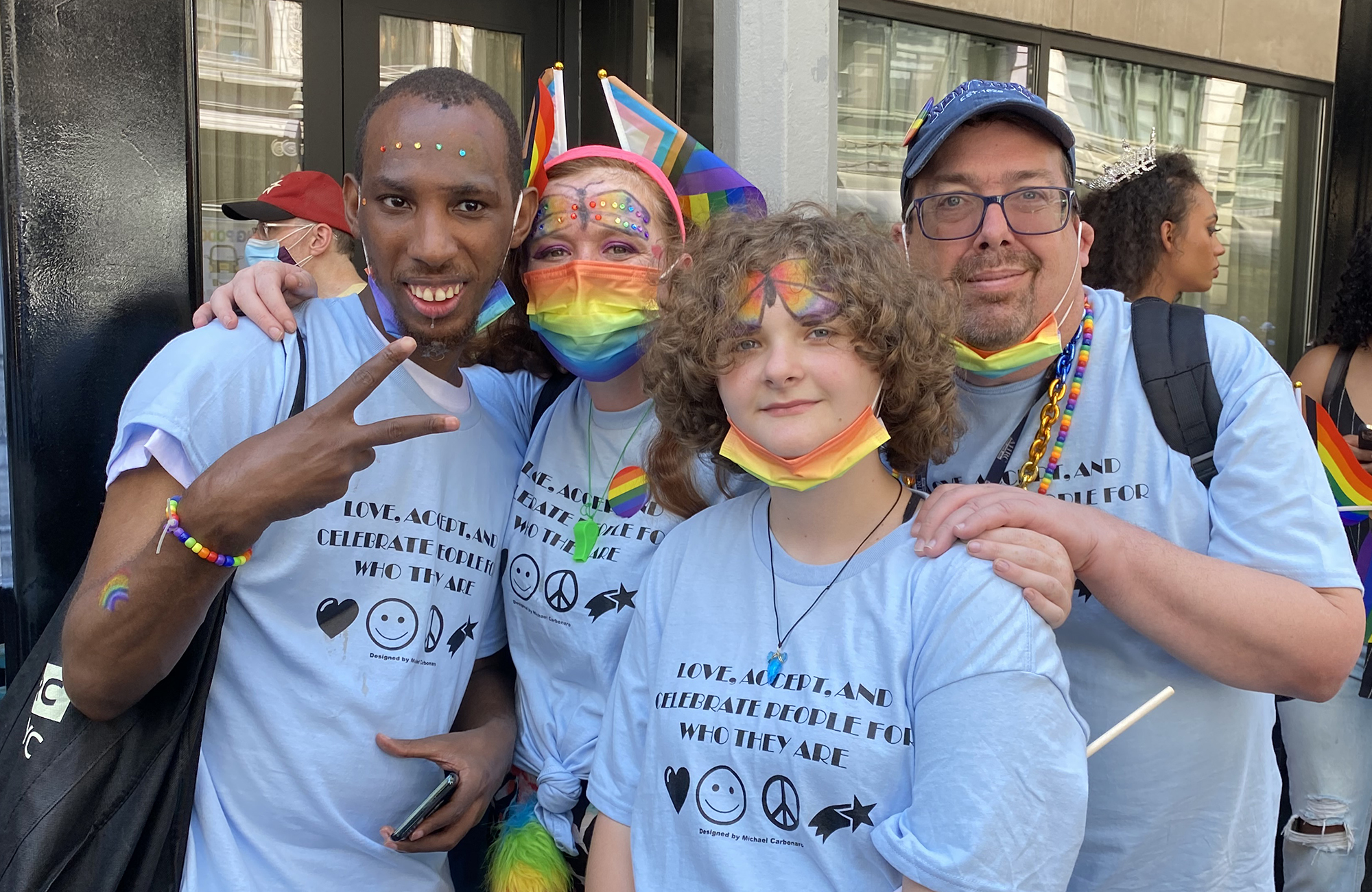 New York League marchers made their return to the pride parade.

Blessing Nwulu, the Director of the JCC Clubhouse and Job Connection Center in Brooklyn where Kishon receives services, said that it was her first time attending the pride parade. 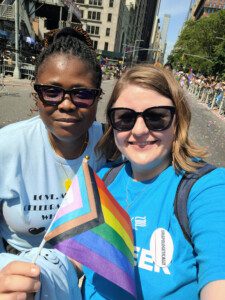 “I participated in the parade to exhibit acceptance and rejoice with those who are rejoicing because it is pride month,” Blessing said. “I want to show that we are all equal and should not be discriminated against irrespective of our sexual preferences or identity. I came to support my people supported and my friends who are part of the community and to show them that it is okay to be and express themselves.”

Blessing added, “Attending the parade helped in a way to explain what support means and at the same time enable me to support the community in eliminating discrimination and barriers to equality.”

Sarah Hatcher, Supervising Psychologist with Day Services, said that attending the pride parade easily relates to AHRC NYC’s vision of a socially just world where the power of difference is embraced, valued, and celebrated.

“I think the parade is essentially about equal rights for everyone,” Sarah explained. “That’s closely aligned with our mission for equality for people with disabilities. I’m thrilled to be here today. I don’t know how I missed it in years past.” 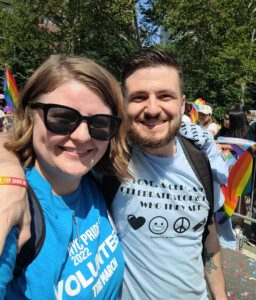 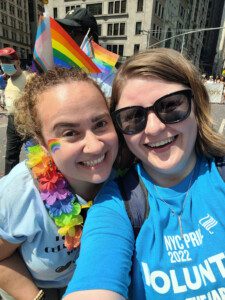 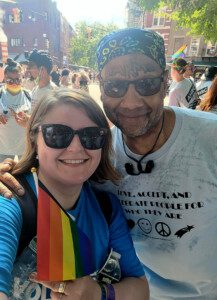 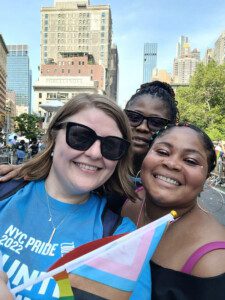