AHRC New York City’s third Leadership Summit brought together top leaders in New York State government and leaders in the I/DD field as well as experts on management. They joined with AHRC NYC’s leadership team of nearly 400 supervisors and managers, along with Board members, to further their commitment to innovation, social justice, advocacy, and leadership excellence. This was the first Leadership Summit since the onset of the COVID-19 pandemic, which brought the need to re-examine and reframe much of what we do as an organization into focus, thus the theme of the event being Refocusing Our Lens.

“We need to re-energize after an extraordinary two years of keeping each other safe running some of the top services in the nation,” said Marco Damiani, CEO of AHRC New York City. “I want you to pause today, reflect on your contributions, and reflect on what we’re doing together and what we can do better while celebrating one another’s contributions.”

Marco said that AHRC New York City will continue to be a leader in driving social justice for people with I/DD with an emphasis on the principle of generosity and a call to action, Stand for Something, that employees bring to each interaction with families they support and with each other.

“We have a responsibility to envision the future,” Marco continued. “We need to look beyond today and tomorrow through to the next 20 years. How will human services function as technology continues to influence our total society?”

Kerri Neifeld, the Acting Commissioner of OPWDD, and Brett Friedman, New York State’s Medicaid Director, each provided words of encouragement to AHRC NYC team members while providing updates on the state of the field.

“Government can be transactional and bureaucratic, but I believe it can be inspirational and innovative,” Commissioner Neifeld said.  She acknowledged the critical workforce challenges facing providers in New York State, saying that direct care workers need to be paid more and respected more for the work they do.

“Covid exacerbated challenges for our field that already existed,” the commissioner continued. “It’s been an opportunity to really highlight what will happen if we don’t invest in our workforce.”

Brett Friedman said the state’s Medicaid rolls have swelled in part due to the challenges brought on by COVID, bringing the budget to $87 billion covering 7.2 million New Yorkers. “It is the most generous benefits program in the country,” he said.  He outlined some of the system’s priorities over the next few months, including digital infrastructure, continuing collaboration between government and providers, and tackling the workforce challenges laid out by Commissioner Neifeld.

Senator John Mannion has represented the Syracuse area in the New York State Senate since winning a special election in December 2020. He is the Chairman of the State Senate’s Disability Committee. A former schoolteacher and the father of a son with autism, he has quickly become one of the I/DD field’s most crucial allies in the fight for equitable funding for I/DD programs and providers.

“The investments being made in the field now by the federal government cannot be one-time deals,” Senator Mannion said. He is urging his colleagues to provide consistent funding to the I/DD field after more than a decade of disinvestment. In particular, he has sponsored S.6516-A/A.801, which will ensure that preschool special education programs, as well as state-approved non-public schools for students with intense needs, receive the same increase in payment rates as school districts. It is awaiting the governor’s signature.

The senator encouraged AHRC NYC team members and families to be active in contacting their local legislators and sharing their personal stories and struggles with the general public. “Caring and intimate work is being provided by DSPs,” Senator Mannion said. “We want to be able to look back and see that this year was the turning point.”

Professor Tawara Goode, the Director of Georgetown University’s National Center for Cultural Competence and Director of the GUCCHD’s University Center for Excellence in Developmental Disabilities, joined to discuss how leaders cannot be at their most effective unless they are respecting and encouraging all perspectives.

“Leadership is NOT management, supervisor, authority, or advocacy,” Professor Goode said. She defined leadership as “a set of personal attributes, qualities, and skills either intuitive or acquired that rouses and motivates others.”

Professor Goode and Steve Williams, AHRC NYC’s Director of Diversity, Equity, and Inclusion, outlined the ways that DEI will continue to influence the agency’s direction and leadership. Twelve listening sessions with AHRC NYC team members over the past year have provided critical insight into how the organization should enhance its DEI initiatives. In encouraging leaders to “change the status quo” Professor Goode said that continued open, honest, and direct communication is paramount.

“Leaders need the capacity and humility to both lead and follow, and the insight to discern which is appropriate in context,” she said.

Marco unveiled AHRC NYC’s branding initiatives, stating that the agency will amplify existing efforts toward achieving social justice for neurodiverse people with an emphasis on the principle of generosity.

“Our re-branding is a symbol of progress and a vehicle for our ambitions to move farther and faster on the path we’re already on.”

AHRC NYC has partnered with IDEON, a world-renowned branding agency, to discover how our new brand will look, and sound, and how it will be both unflinching in its message delivery and unexpected in challenging societal perceptions of people with disabilities.

Andrea Katz and Martyn Straw from IDEON reiterated five tenets of the brand as outlined by Marco when speaking about AHRC NYC’s branding journey:

Aspects of the new brand will continue to be debuted over the coming weeks.

Leadership Summit guests heard a variety of philosophies regarding management and purpose from speakers Simon Sinek, an author and thought leader, and Aaron Boone, the Manager of the New York Yankees and a recent Thurman Munson Award winner.

“Leadership has nothing to do with rank or title. It’s the responsibility to see those around us rise,” Sinek said. “It’s not about being in charge, it’s about taking care of the people in our charge.” He recommended a thought exercise where people pose the question “Why are we friends?” to their closest companions, thereby revealing important insights about one another and discovering what we each give to the world.

Boone said that the ideal leader embodies the concepts of consistency, energy, toughness, and remaining neutral and self-aware no matter the situation. He encouraged AHRC NYC team members to have broad ideas of what collaboration can mean.

“Comradery exists in a lot of different ways,” Boone said. “Sometimes it’s getting after each other and holding ourselves accountable. Sometimes it’s celebrating being on the same page and getting along with one another. Being in the manager’s chair, you have to be consistent and authentic every day.”

To close out the third Leadership Summit, Marco announced that AHRC NYC would be recognizing ten employees who have exemplified the principles of effective leadership. They are: 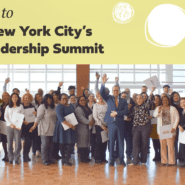 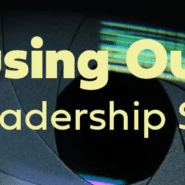 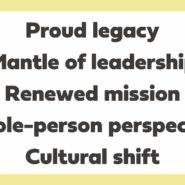 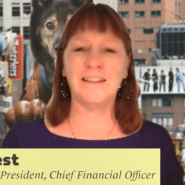 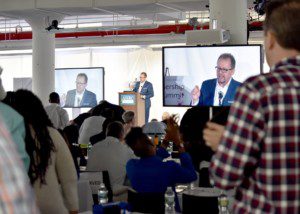