AHRC New York City was recognized as Member Agency of the Year at NYSID’s 2021 Annual Meeting and Awards Ceremony on Tuesday, October 26th. AHRC NYC is a founding member of NYSID, which creates meaningful job opportunities for people with disabilities in a variety of industries throughout New York State with the support of government, non-profit, and corporate partners.

Jerome Crawford, a Messenger supported by AHRC NYC for more than 17 years, was also honored by NYSID as the Employee of the Year, recognizing his unwavering punctuality and positive attitude throughout his tenure and especially since the COVID-19 pandemic began.

Member Agency of the Year

“The Member Agency of the Year award is based on a proven track record over many years or something extraordinary, like work during a pandemic. AHRC NYC deserves recognition on both fronts,” said Jerry Gretzinger, the award ceremony’s host. “Not only is it a founding NYSID member but it also a diverse, integrated team of experienced landscapers, custodians, office staff, and more. They rise to the challenge of devastating snowstorms, gas emergencies, and the nation’s most challenging health crises.”

Steve Towler, Vice President of Programs and Business Solutions, said that AHRC NYC’s Employment and Business Services supports more than 2,500 people annually, with nearly 500 janitorial workers, dozens of messengers, and as many as 50 landscapers who were among those who kept New York City operational during the worst days of the pandemic. With NYSID’s and AHRC NYC’s support, Messengers like Jerome have been contracted to work with New York City’s Department of Social Services and the Human Resources Administration for more than 20 years.

“NYSID is the major component for us to grow and develop new possibilities,” Steve said. “AHRC NYC is very proud of the relationship we have with NYSID and all of the different opportunities that have been developed over the years. It really is life-changing for people, including Jerome.”

Employee of the Year

Jerome says that he is “one of those kinds of people that likes other people.” He is perfectly suited for his role as a Messenger, delivering sensitive documents between city government agencies throughout the five boroughs. 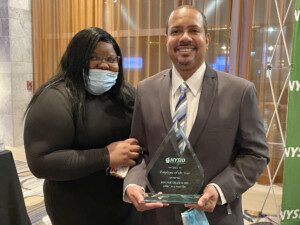 Jerome Crawford with his Aunt Veronica

“The reason that I love my job I because I know how to get places—what bus I take, what train I take, when I get off,” Jerome said. “I use Google Maps on my phone to get places. I always come to work bright and early and I’m never late.”

Earning a paycheck is important to Jerome for personal and practical reasons. “I feel blessed when I get paid,” he explained. “I pay my own bills like rent and cell phone. I save money. I don’t spend too much money like I used to; I like to save it just for a rainy day, just like this pandemic.”

Jerome’s family could not be prouder of him, according to his Aunt Veronica. “It’s surprising but amazing for him to get this award,” she said. “Jerome has come such a long way. He’s gone from being nonverbal to an amazing grown man that just loves his job. He’s inspirational.”

“Everywhere I go, people love me. I like to put a smile on people’s faces,” Jerome beamed. “Being a messenger, I’ve never been so happy in my life.”