AHRC New York City was proud to once again be able to celebrate Pride with a day of performances, art exhibits, and friends and colleagues reuniting in the spirit of honoring the societal contributions of lesbian, gay, bisexual, transgender, and queer people.

“This was the first live performance we have had as an agency and the first one I’ve attended in well over a year, and it was so nice to see everyone’s beautiful smiles,” said Melanie Moelis, Chief of Staff for AHRC New York City. “Both the art show and the live performance were great showcases of the amazing talents and confidence these artists possess and the ways in which our staff support and inspire them are exceptional.”

Celebrating You and Me

Our Pride festivities began earlier in the month with a video featuring AHRC NYC self-advocates and staff members expressing in their own words what it means to have Pride.

Watch the full video below:

Steve Williams, Employee Relations Manager/Diversity Officer, said “Pride means I don’t need anyone’s consent or permission for my humanity. Pride means honoring those who said ‘no’ to the system and fought back. The fight for equality continues, and we must show up and show out for ourselves and others who struggle for their freedom.”

“Pride is giving me the ability and the confidence to help unite different agencies and different groups of people for a common goal so we can help other people,” Asante Breland, a self-advocate, said. “That’s how I’m trying to deliver it so that we can really make some good stuff happen.”

As an LGBTQ+ / Disability community ally, AHRC NYC partnered with Heritage of Pride and supported people to participate in Pride initiatives throughout the month of June. Michael Carbonaro, a young man who identifies as gay and autistic, collaborated with staff members to create an ally training which he presented to peers and staff.

Pride in New York City in 2021 was based in three neighborhoods recognized for their LGBTQ+ culture: Hell’s Kitchen, the Village, and Chelsea. AHRC NYC staff members organized an art gallery at Betty Pendler Day Services in the West Village where people-supported and volunteers featured Pride-themed art.

Guests were greeted at the entrance by “A Drop of Pride,” a large acrylic painting by Paige Eartha Johnsie Medlin, an artist and volunteer with AHRC NYC programs.

“I am a straight ally of LGBTQ community and I’ve made it my duty to learn about the culture, from its sad to exciting moments,” Paige said. “One part that inspires me is the Ball culture. It’s full of energy, liberating, and it allows individuals to be themselves amongst their peers. One icon dance move that gets the people going is the ‘death drop.’ That is the action being done in my painting.”

Paige worked with Jonathan Epstein, Transition Developer, and teaching artists Annabell Allen-Cummings and Didi Ntsie to create an accessible curriculum to share with the whole agency and teach people about the history of the LGBTQ+ community and how to express Pride and Identity through artwork. Collectively, Paige, Annabell, and Jonathon taught 11 one-hour classes to over 75 artists. Over 100 pieces of art that celebrate the LGBTQ+ community and express artists’ pride and identity were created. The group coordinated for pieces to be picked up from people’s homes by Sacha Amry, Director of Recreation Services, and for quality digital images to be taken and printed out for the gallery show by Darinka Vlahek, Director of Curriculum Development for Adult Day Services.

Betty Pendler Day Services also served as a welcoming area for members of the public as well as performers and staff members from AHRC New York City. Refreshments and resting areas were available for people to escape the heat.

Back on the Stage

Dale Hensley, Art Consultant and founder of Our Broadway, organized the run-of-show. It was a chance for him to finally see many of the performers he has missed working with in person as well as meet others for the first time, including Fouad Salau from Day Hab Queens Without Walls

“I work with Fouad privately on Zoom and he is the fastest learner I have. He can hear a song once and won’t forget it,” Dale explained. “The song he sang at the performance is from Dear Evan Hansen, which he had heard on the Tony Awards four years ago and remembered it. It’s truly remarkable.  What a gift it is for me to be able to see these performers fly in front of an audience.” 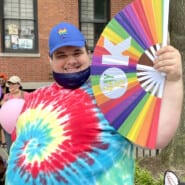 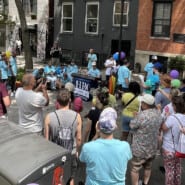 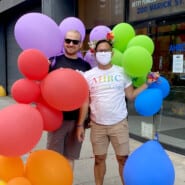 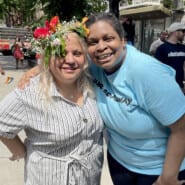 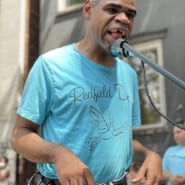 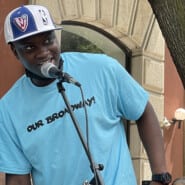 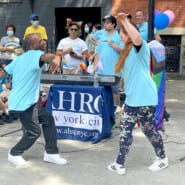 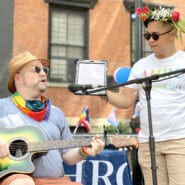 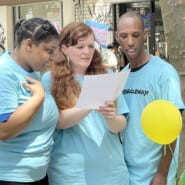 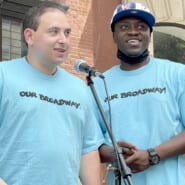 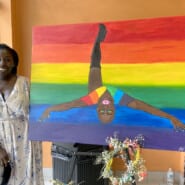 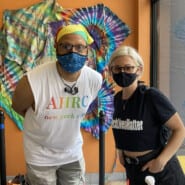