AHRC New York City hosted legislators, self-advocates, parents, and more in a series of five breakfast meetings held in each borough throughout November and December 2019. These meetings served as a chance for AHRC NYC to educate legislators on critical issues regarding the upcoming 2020 New York State budget and the crisis facing disability services throughout the state. Moving forward, AHRC NYC has joined a coalition of service providers called New York Disability Advocates to ensure a unified front during this important time. 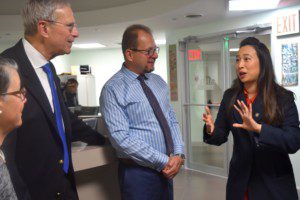 “Whatever the state budget deficit is, we know there are resources in this state and there are investments that can and should be made into the field of I/DD,” said Marco Damiani, CEO of AHRC New York City, during a meeting at Norfolk Adult Day Center in Manhattan. “We’re trying to be proactive through our community representatives. We feel strongly based on our size, reputation, and history of advocacy that we need to meet directly with our legislators.”

Immediate Challenges to Take On

The I/DD field is on the brink. For over a decade, New York State government has failed to provide a cost of living adjustment (COLA) to independent disability service providers. This has created a crisis where dozens of organizations are confronted with dire financial burdens, with hundreds more facing increasing budgetary constraints. To make matters worse, state-operated disability programs have received a COLA every year since 2014, creating a deeply unequal system.

“Back 10-to-15 years ago, the OPWDD financial watch list had about a dozen agencies,” said Al Kaplan, AHRC NYC’s Senior Policy Advisor. “Today, there are 152 agencies of out 600 total on the list, which means more than 25% of them are on a financial watch. That’s just crazy, and it’s not sustainable.” 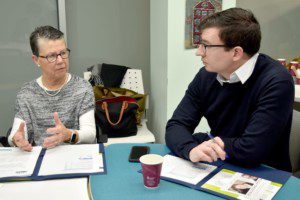 The lack of a COLA has only exacerbated existing crises in the field, especially regarding residential development and direct support salaries. Laura J. Kennedy, AHRC NYC Board Member, said that AHRC NYC was there for her daughter, Julia, over 20 years ago when she needed a home, but parents, many of whom are already aging caregivers, now are forced to ensure interminable waiting lists for residential placement.

“Everyone should have a place in the community and it’s not right that they don’t,” Laura said. “Billions of dollars have been eroded from this system because we have not been properly funded for more than 10 years.” Al Kaplan said that while the state no longer provides full transparency on the residential waitlist, a conservative estimate puts the list at 11,000 people, with about half in New York City. 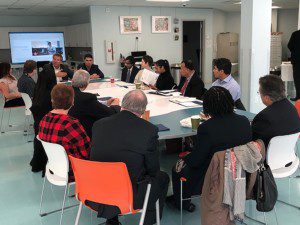 Legislators met with parents, staff members, and self-advocates in Queens

Steve Towler, Vice President of Programs & Business Development, said in a meeting in Queens that as much as 80 percent of existing resources in certain departments go towards staff recruitment and retention as the turnover in DSP positions continues to expand. “The BFair2DirectCare budget additions have been good, but it hasn’t been every year, and it also doesn’t solve the larger issue of the systems 600 agencies being stable,” Marco added. “Not even strong—just stable.”

In 2020, AHRC NYC and its partners at NYDA will continue working directly with legislators to ensure the sustainability of disability services in New York State.

Thanks to the following legislators who came to a legislative breakfast or provided a representative in their place: