Blanca Ortiz carries the life principles her mother and other Puerto Rican family members taught her each day she supports people with disabilities.

“My mother raised me and she instilled all of her values in me,” Blanca explained. “Don’t talk back to my elder, help out as much as I can within my community, and if you’re walking down the street and you someone in trouble, you stop and you help them out.”

In personifying these values, Blanca was an obvious choice to be a recipient of a Bronx Latin Impact Award, sponsored by Schneps Media. The awards honor people with Latin American heritage who make positive impacts in the lives of others and “serve to inspire and empower future generations to promote and pursue their passions in an effort to continually make a difference.”

Tracy-Ann Adams, Associate Vice President for In-Home Services, and Jennifer Teich, Director of Individualized Supports, nominated Blanca for the award. “Blanca is a model citizen and is a great role model.  As a Latina woman, she represents what it means to give back to the community through leadership and service. She has dedicated her life to helping people strive for their best possible life through her work at AHRC.  The families and the people she supports are grateful for Blanca and can’t say enough about her.”

Family is an important concept to Blanca. “I know within my family and other Hispanic families we tend to help each other out,” Blanca said. “For example, my kids didn’t go to daycare—my mom helped take care of them. That’s just what we do.” 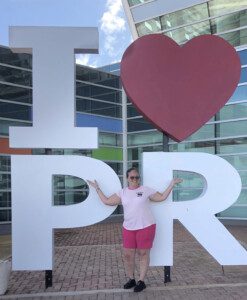 Blanca’s family hails from Morovis, a town in the north-central part of Puerto Rico. Frequent visits to the island and being immersed in New York’s diverse Hispanic cultures have allowed Blanca to connect with Spanish speakers of all nationalities.

“I’ve worked with Puerto Ricans, Dominicans, Ecuadorians, everywhere in Latin America,” she said. “I’m often the most consistent person working with families because care managers can come and go. There are limits to what a Field Supervisor can do as opposed to a Care Manager, but I do try to help them as much as possible, especially if the family is Spanish speaking.”

Blanca uses empathy and compassion to support people. “I always try to put myself in that person’s shoes. What can I do to better that person’s life?” she explained. “If I can help out I will, and if I can’t I’ll find someone who can help you, or I’ll find the answer.”

Tracy and Jennifer said that Blanca is one of the main reasons for the continued success of Parkside Terrace, an apartment building in the Bronx that AHRC NYC collaborated on to secure affordable housing opportunities for people with I/DD. “Blanca was key in creating a community within the building and fostering relationships amongst the tenants and her staff.  She is an integral piece of the puzzle and a foundation for the success of the new model of service. She helped 12 people move into their own apartments, learn their community and live on their own for the first time.”

Blanca made sure to keep in touch with the Parkside residents throughout the darkest days of the pandemic. “I never stopped visiting them—that’s when they needed me more. Many of them are living alone for the first time. They call me constantly. I love working with the people there. They made sure I was safe, and I made sure they were safe.”

Blanca was honored to receive recognition for her work at Parkside. It is inspiring her to achieve more for herself and the people she supports, an attitude she encourages for any young professionals.

“Never give up on yourself. If you find something you want, work for it, and don’t give up. Never take no for answer—keep pushing and going, because eventually, someone will say yes.”