Graduates from AHRC New York City’s Melissa Riggio Higher Education Program at the City University of New York (CUNY) were celebrated throughout the month of June in virtual ceremonies held for students studying at all four campuses of the program. Sixteen remarkable people demonstrated incredible resiliency and growth as they transitioned from in-person classes to a virtual learning experience due to the COVID-19 pandemic.

“This is an opportunity to look back, to remember all of the things you’ve learned, the friends you’ve made, and all of the opportunities before you,” said Marco Damiani, CEO of AHRC NYC. “This year has been different, having gone through this past 14 months learning together virtually, staying safe, trying to stay focused–the enormous reliance of the students, families, and peer mentors is remarkable. To the extent that its possible, we should celebrate even more this year and honor your accomplishments. We hope you’ll become beacons of support and inspiration for the students coming in behind you.”

“I still remember meeting you five years ago and I have seen each of you grow into incredible, independent adults,” Jessica Giorgio, Program Director for the Melissa Riggio Program at the College of Staten Island (CSI) and Borough of Manhattan Community College (BMCC). She reflected on Daniel Davila’s athletic exploits, Denis Pupovic’s gentlemanly nature, and other personality traits unique to each graduate before they were presented with their certificates.

“I learned a lot of about myself—there’s a lot of weakness and strengths you learn to work on,” Daniel said. “The studies are not hard–if you put your mind to it, you’ll get things done. Stay positive, keep your routines as usual, and don’t get distracted. Everything is going to be fine!” Daniel is currently working at Amazon and hopes to move to New Jersey in the future.

“I remember when I first started in the Melissa Reggio Higher Education program,” said Kiaseame Green from Hostos Community College. “It was in 2015, my new experience as a college student. I was shy, and nervous but then I figured out that there was nothing to be nervous about because I was not alone. I had mentors that were willing to support me on anything I needed.”

Kristal Culler, another Hostos student, credited the program with honing her vision for the future. “I am really blessed to be in the Melissa Riggio Program and to go farther in life and to continue to have more skills. After I finish the program, I want to get a job and live independently and continue [improving] my money skills and cooking skills. My dream job is to work inside of a church and be an interpreter in sign language.”

The past, present, and future achievements of the students were celebrated by Melissa Riggio Program staff members and mentors including William Muller, Community Support Supervisor, who said “Our graduates have all grown tremendously in the last three years, but they still have limitless potential as advocates and trailblazers.”

Numerous commentators remarked on the unwavering spirits of graduates.

“This past year was hard, but you’ve persevered and done the work,” said Carrie Shockley, Director of Disability Programs for CUNY. “You’ve taken through Zoom, learned how to navigate Blackboard, learned some things about yourself in the process, and above all, I believe you’ve shown great strength and perseverance. Whatever your path, whatever your goals, we do hope in small way that CUNY has been a part of that, and we thank you so much.”

The founders of the Melissa Riggio Program, Steve and Laura Riggio, said that the success and growth of the program since it began is inspiring and affirming of their daughter’s legacy. “Many years ago when Melisa had a dream of attending a post-secondary program, we started to develop it with AHRC,” Steve said. “Unfortunately, she was not able to attend the program because we lost her in 2008, but it is now flourishing because of the great staff at AHRC and students like you. Congratulations on completing this year, especially after a difficult challenge like this one.” 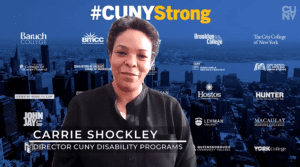 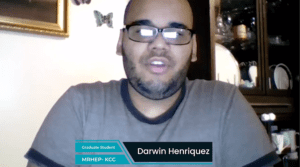