There’s a sign at the entrance to the FDNY EMS Training Academy that reads: “Through these portals pass New York City’s Best EMTs and Paramedics.” Those portals also allow dedicated employees like Junior Broderick and Juan Garcia to pass through and complete their janitorial work throughout the complex at Fort Totten, which is located north of Bayside, Queens.

Junior and Juan work for Hudson River Services, which is contracted to provide janitorial and landscaping services at Fort Totten. They are supported by their peers, such as Richard Clark and William Bell, supervisors, and Job Coach, Yusaf Gussine-Thomas, and receive a fair wage and full benefits. This is made possible through AHRC NYC’s Employment and Business Services (EBS), New York State Industries for the Disabled, (NYSID), and ThriveNYC, a city-wide mental health initiative started in 2015.

Steve Towler, AHRC NYC’s Assistant Executive Director, and Belma Dautovic, Borough Director for EBS-Queens greeted Dr. Jill Bowen, Senior Advisor for Mental Health Initiatives at the Office of the Deputy Mayor for Strategic Policy Initiatives, and Lisa Bernard of the Bureau of Developmental Disabilities at the New York City Department of Health and Mental Hygiene to show them around the facility and to demonstrate how funding from ThriveNYC is helping workers like Junior and Juan. Zulficar Ali, the Senior Coordinating Foreperson, led the tour.

Steve explained that this job site became available through AHRC NYC’s partnership with NYSID, which has existed for over two decades. Collectively, about 10 people work at the Fort Totten complex, with some arriving early in the morning and the last person staying until 10:00 pm daily.

Throughout the tour, Dr. Bowen and Ms. Bernard asked questions including how much workers are paid, what benefits they receive, the type of work they do, and what the role of a Job Coach is.

Yusaf Gussine-Thomas has worked as a Job Coach for over a year and a half. He told Dr. Bowen that his work must be adaptable to whomever he is supporting. “Some workers have attendance problems, sometimes they don’t want to do the job completely, like going right to mopping before sweeping,” he explained. “I have my own approach, which is more advising, staying positive, and giving them tips about how to make the cleaning easier.”

Yusaf said that his orientation included training on how best to coach people and how to teach and advance new skills. Steve Towler noted that all Job Coaches take Innovations training, which is a mandatory OPWDD course.

Dr. Bowen was impressed following her discussions with Yusaf and several Hudson River Services workers at Fort Totten. “You’ve introduced me to different people with different backgrounds, and yet they all seem to be and feel a part of this,” she said. 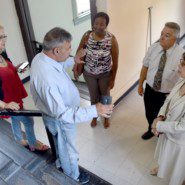 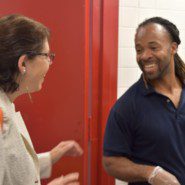