“When we talk about Direct Support Professionals, we’re talking about a career,” said Yuliya Khripunkova, Assistant Director for Special Projects & Quality Assurance with EBS. “I started as a Camp Counselor. You learn how to do it and then you became so invested in this profession that you continue growing so you can spread your wisdom and knowledge.” 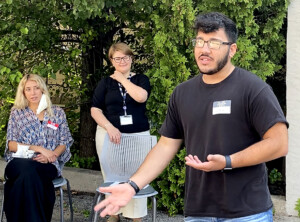 Daniel Finan speaks about the joys of job coaching

One person who has put that philosophy into practice is Daniel Finan. Daniel was recently promoted to a Senior Job Coach position, which will see him continue to support workers in a variety of capacities while also training other Job Coaches to hone their skills.

“I’ve been working at AHRC NYC for a year-and-a-half, and it has been a transformative experience,” Daniel said. He found the initial job posting on InDeed after wanting to explore career options that would supplement his studies toward a master’s in social work. “I wanted to see what kind of jobs would be a great introduction to this field.”

Daniel recounted that he quickly realized he had made a good decision. “One of the first days that I worked on my own, I was thrown right into the fire,” he said. “One of the people I was supporting was having a situation with a manager and was at risk of possibly losing their employment. I was able to sit down with that employee and speak on a supportive level with them; that person was able to turn around and become the employee of the month. That was when I knew that this field was really special.”

Helping People “Unlock a Part of Their Lives”

Daniel has supported workers in several environments, including Amazon, Target, Barnes and Noble, Bed Bath & Beyond, the NYC Test and Trace Corps, Outback Steakhouse, and Hudson River Services porters at the Staten Island Ferry. “It’s been a great experience to see so many businesses behind the scenes,” he said.

His work has earned numerous plaudits. Tatyana Romanova, Employment and Community Service Manager, said “Daniel has an uncanny ability to meet the needs of people he serves. Due to the pandemic, Daniel provided tremendous support to our individuals. For one example, he spent hours on the phone with the Department of Labor to ensure individuals that lost their job received unemployment benefits and pandemic assistance while their system was down.”

Tatyana continued, “Daniel is extremely patient and willing to do whatever it takes to help the people he serves to meet their goals of being as independent as possible. His talented skillset and hard-working attitude are what make him an extremely valued employee.”

Job coaching is inspiring Daniel to further his studies in social work and continue supporting workers with disabilities. “I do enjoy working with people with I/DD,” he said. “There’s a lot of ways you can make an impact. Particularly in employment, it feels special to help someone transform their life in a way they may not have been able to. You can unlock a part of their life. Work is often the most important part of their lives.”