Finding a Job & a Community at Brooklyn Museum with Dawnrae Prescott

Since 2014, she has worked at the Brooklyn Museum as a coat checker and more recently as a ticket taker. She loves the job and her co-workers.

She also would like to work remotely as a salesperson, selling perfumes and lotions. But don’t expect her to give up her job at the museum. If it’s up to Dawnrae, she’ll be there forever.

“It feels good to work at the museum,” she said. “I do my job well. Working makes me feel independent and proud.” 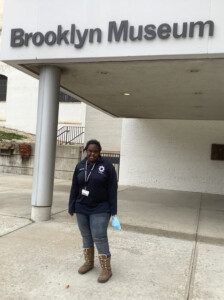 Dawnrae Prescott stands outside of the Brooklyn Museum

Employment has boosted Prescott’s self-confidence, her mother, Deborah Dover, said. “She was always confident, but she has grown more confident with the job.” Deborah always knew her daughter was capable to work, provided she found a suitable job. “It never crossed my mind that she wouldn’t have a job,” she said.

Arianna Eshoo, the museum’s Associate Manager of Visitor Experience, has noticed the pride Dawnrae takes in her work. “She’s part of the team and she’s good with the customers,” Arianna said.

“She comes in sometimes with her program and she says she will be the tour guide,” Arianna said. “She has a huge sense of pride working here. She’s excited to talk about her job. It has given her a sense of independence.”

Staff who have worked with Dawnrae over the years describe her as a sweet and caring person. “She’s a social butterfly,” said Tanika Marshall, AHRC NYC’s Community Support Supervisor in Brooklyn. “Whenever we have our holiday parties, she’s the first one on the dance floor and she wants to include everyone.”

“I dance all the time,” Dawnrae said. “I’m kind of a party animal at times.” Dawnrae, who lives in East Flatbush with her mother, also enjoys bowling in the Special Olympics. She said she would like to try basketball, softball, and golf.

Indira Laktaeva, AHRC NYC’s Employment and Community Service Coordinator in Brooklyn, recalled working as a Direct Support Professional with Dawnrae. She enjoyed going to the Brooklyn Public Library for dance class or adult coloring. “People like Dawnrae; she has her own charm,” Indira said. “When she talks to you, you feel special.”

‘She’s Always Happy at the Museum’

Liudmyla Popovych, an AHRC NYC Job Coach, has worked with Dawnrae for about a year. “She’s always happy at the museum when I go there,” she said. “She offers to help her co-workers and they try to help her when they can.”

When the museum was forced to close at the height of the pandemic, Dawnrae missed work. But as things began to open up, she returned to the museum and was reassigned as a ticket taker during the busy Studio 54 exhibit. Liudmyla said Dawnrae learned how to scan the tickets and performed the job well. Arianna has confidence in Dawnrae.

“I’m very proud of her,” Deborah said. “She likes the people – and she says ‘everyone looooves me.’”