Jon Bunge thinks that creating art should make people feel excited. Each day, Jon seeks to unlock the talent and visions of an eclectic group of creative minds as an Art Consultant at AHRC Fisher Day Services in Harlem.

Giving the Gift of Art

Jon’s art room, which was recently remodeled thanks to the TV show George to the Rescue, churns out a prolific amount of drawings, paintings, multimedia collages, and more. Jon works with his colleagues and contacts to identify community partners that can exhibit work created by Fisher Center artists, including an exhibit right up the block from Fisher Center at a branch of the New York Public Library. 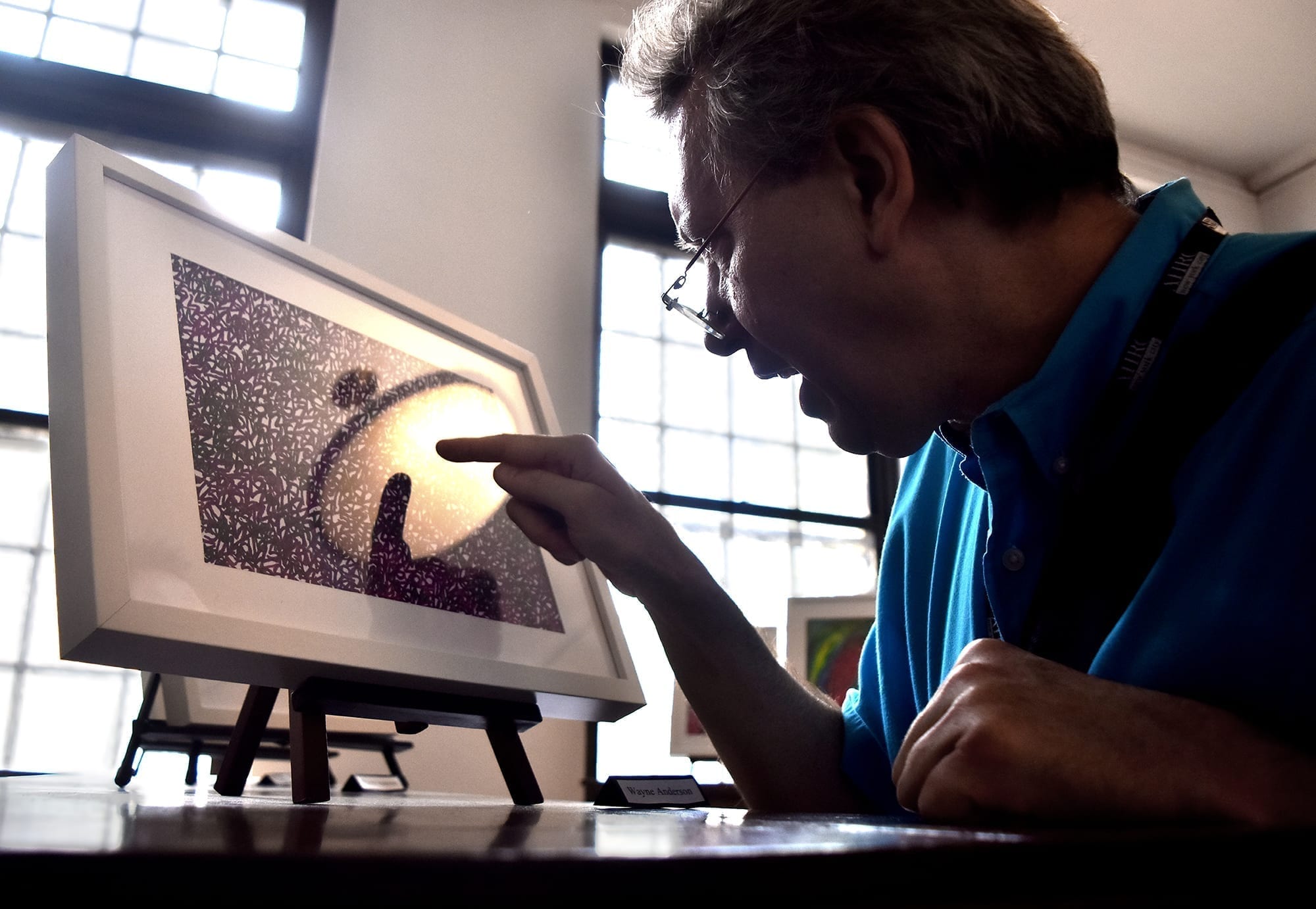 “By discovering people’s individual visions, we’re giving something to the world. People love to see different kinds of art,” Jon said at the library, pointing out the colorful abstractions created by artists Wayne Anderson and Oswald James in their two-person show. Each artist had several paintings/drawings featured. “We are enriching the world through the gift of art. It’s a chance to unearth these individual visions that people get joy out of looking at.”

Velma Morton, NYPL Branch Manager, is always appreciative when Jon comes to ask if the Fisher artists can exhibit some of their work at the library. “I love coming into work and seeing the art. It’s such a benefit for the community for anybody to be able to walk in here and see the art of this magnitude,” Velma said. “And I love telling people that it was created by AHRC, which is right up the block from here.”

Other spaces where Fisher Center artists have been exhibited include Harlem Restaurant, Il Cafe Latte, Poe Park Visitors Center, and Montefiore Medical Center, both in the Bronx. An accomplished artist in his own right, Jon has his own website and has been exhibited throughout New York City, primarily in his now-home borough of Brooklyn (he’s originally from St. Louis). But art was not always his primary focus.

“I had a 20-year career in social work before getting this job. I worked with a variety of populations, including adults with disabilities,” Jon said, explaining that his time in college exposed him to deeply upsetting wealth disparities. “I did do art in my 20s, and then I basically stopped because it didn’t feel like it was doing enough for society. What was my art doing for low-income people?”

Many years later, Jon found his creativity suddenly calling him. “I was in a dollar store and I saw some paints and I impulsively grabbed them. Through that I rediscovered my passion for art,” he said. Jon began taking professional art classes and decided to study towards a Master of Fine Arts degree at City College of New York, where he met Dhanashree “Dhanni” Gadiyar, who was then the Art Consultant at Fisher Center and is now the Project Coordinator at ArTech, a multidisciplinary art center located at AHRC NYC’s Howie Stone Day Services.

“Something that struck me in our time as colleagues in the MFA program was that Jon was compassionate towards people and was a very good listener. He was also able to put himself in another’s artist’s shoes and give them critiques according to the thinking of the artist,” Dhanni said. “Jon is a brilliant artist and a very patient, kind person.” Dhanni thought that Jon was a perfect candidate to succeed her as the Art Consultant at Fisher, and Jon found the opportunity to be a great fit.

“This job has been a nice marriage of my art and my social work background,” Jon said. “Art helps people feel creative and productive and that’s what gets me really excited. I just love to see people be creative.”

Jon unlocks the creativity of Fisher Center artists using his knowledge of art history and his ability to identify their artistic strengths. “Some artists work best when given a reference point,” he said, saying that he encourages artists such as Timotheus Davis and Devona Gamble to interpret famous works from some of history’s most prominent artists. Timotheus, for example, has taken an interest in the landscapes and portraits of Paul Cezanne, one of Jon’s favorite painters. 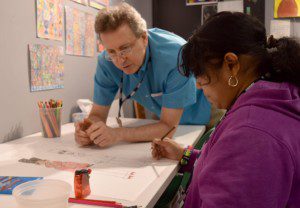 Nichole Perez illustrates characters using colored pencils that she brings to the center from her home.

Jon is able to identify the strengths and preferences of all the artists he works with, adapting projects to fit their abilities. “Nichole Perez likes to draw characters on large sheets of paper, so I make sure to have a big size on hand,” Jon explained. He also encourages artists to break out of their comfort zones. “Oswald, who is featured in the art exhibit at the library up the block, wasn’t doing any art two years ago, but we discovered this passion that he had for abstract drawings. We’ve gotten to work on bigger pieces with him lately,” Jon proudly said.

Identifying those hidden talents is what it’s all about. “If you discover someone’s passion you’re going to see their best work; that’s not rocket science,” Jon said. “When we bring visitors in, we want people to feel proud of their work. For me to help people discover what they love to do is really exciting.”