Gilda Lindenblatt was treated to an 80th birthday celebration at Pace University. Dr. James Lawler, a professor at Pace’s Seidenberg School of Computer Science and Information Systems and a longtime community partner of AHRC New York City, said that they have been recognizing Gilda’s birthday at the school for several years. Gilda attended the party with her housemates, Todd Flaherty, Blanca Colon, and Michael Tirotta, and two Community Support Professionals from AHRC NYC’s Walter and Evelyn Redfield Day Services, Nikolas Peters and Jessica Baldwin.

“Gilda is one of our big boosters at AHRC NYC,” Dr. Lawler said. “She has been in my courses partnering with students on projects and websites. She was also on the panel for our disabilities film festival earlier this year.”

“I like to talk to the students at Pace,” Gilda said as she ate a feast of beef stew and veggies. “We have good discussions.” 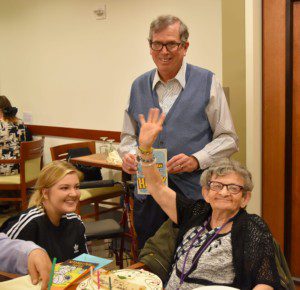 As a self-advocate, Gilda has never been shy to express her opinions or share her thoughts on a variety of subjects. Her perseverance and fearlessness often impress those who work closest to her.

“She’s really strong, for lack of a better term, which I really admire,” Nikolas Peters said. He has known Gilda for over three years. “She has always been more than willing to speak up for herself.”

Gilda’s fiery spirit inspires students in Dr. Lawler’s classes as well. “The students have more of an impression of her as a person with abilities, not disabilities,” Dr. Lawler said. “She’s very smart, she’s very articulate, and she motivates other people to be a part of our programs.” 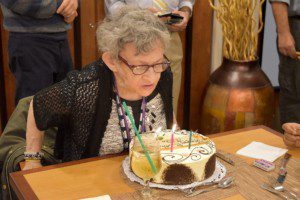 To celebrate the octogenarian occasion, Dr. Lawler and Hazel Small, a junior at Pace who is currently in one of the professor’s service-learning classes, gave Gilda a bag filled with university-branded merchandise, including a subway-inspired sweatshirt and an adorable Pace teddy bear. She also received a number of birthday cards from staff and students.

“I love coming here,” Gilda smiled. “I talk about the things I like, like current events. I read the newspaper every day. I like science, the planets, the Milky Way and all of the star clusters. I like math, and I know how to use the calculator. And I love talking about all things I’m able to do and the things I’m capable of doing.”