On Tuesday, March 22, AHRC New York City welcomed Kerri Neifeld, the newly confirmed Commissioner of OPWDD, for a tour of two programs, meeting supported workers at an employment hub, and a visit with two valued corporate partners. Commissioner Neifeld was confirmed by the State Senate on March 2nd after being named Acting Commissioner in November 2021; throughout her tenure, she has demonstrated a firm commitment to improving existing services and innovating new methods of supporting people with disabilities, committed to working closely with nonprofit partners such as AHRC NYC, and supported the significant increases in funding for this field proposed in the state budget.

Marco Damiani, AHRC NYC’s CEO, said “Our tour with Commissioner Neifeld was informative and inspirational on many levels. The level of creativity, positive energy, engagement, and commitment to our mission was extraordinary. The Commissioner and her team were extremely impressed with everything they saw and everyone they met. At the end of the day, the Commissioner presented us with a proclamation from Governor Hochul for Developmental Disabilities Awareness Month. Telling our story is always important, and for the Commissioner to witness it for three hours was extremely powerful.” 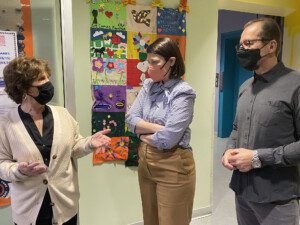 The day began at Esther Ashkenas Central Park Early Learning Center, where Principal Beth Rosenthal guided the commissioner on a tour of the school. Central Park ELC is one of seven AHRC NYC schools exclusively teaching students with disabilities.

When asked by Commissioner Neifeld how the school defines its goals, Beth responded “I quantify success by asking our parents how is your child doing outside of school? We run traditional ABA programs where, in the school, the child can do everything. But if the parent can’t see the changes, what’s the purpose?”

Raymond Ferrigno, President of the AHRC NYC Board of Directors, encouraged the Commissioner to investigate ways to streamline the educational bureaucracy. “Going through the breadth of services can be overwhelming for many parents who don’t have the time or resources to do so,” Raymond, the father of a young man with autism, said. 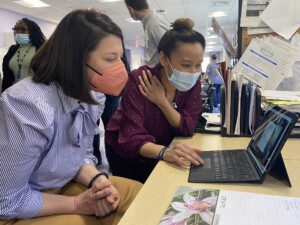 At Walter and Evelyn Redfield Day Services, the Commissioner engaged with direct support staff members and people receiving in-person services, including a brief performance by Our Broadway stars Natale Micelli, Fouad Salau, and Rosa Santos.  Commissioner Neifeld also joined a Zoom call with people receiving remote services, where she was asked by Martin Neal what the future objectives for the commissioner and OPWDD are.

“We have a lot of goals,” the commissioner responded. “We want to make sure services and housing options are available, with various options so that people have choice. Our goals are meant to help people to achieve their personal goals—getting a job, going to school, going back to day programs. We want to make sure we support all of those opportunities.”

Brian Simon, Regional Director, and Necole Jenkins, Project Manager, told the Commissioner that HRS employees are responsible for disinfecting, window cleaning, bathroom cleaning, floor stripping and waxing, and snow removal, among other duties when required. They said that the COVID-19 pandemic was an opportunity for HRS to expand services and hire more people with disabilities.

One worker provided a firsthand account of his daily schedule. “What we do is we maintain the building. We focus most of our cleaning in a specific area of the building,” Jimmy Leahy said. Jimmy has worked for HRS for more than 10 years. He told Commissioner Neifeld about his apartment in Jackson Heights, where he is visited by an AHRC NYC Community Habilitation Professional twice per week to support his independent living choices.

“I can do my own laundry and food shopping,” Jimmy said. “I’m still getting the hang of living on my own, but it’s working well.”

“We far surpassed more than 20 students coming from the Project SEARCH program,” Mitchell said. “We held a graduation ceremony one year for the students and we got to meet the fathers, the mothers, the sisters, the brothers, the cousins. You realize you aren’t just impacting one person but a whole family. It’s become really rewarding to me.”

Marc Williams and Priscilla Nunez represented Salesforce, which has sought to expand its employment of people with disabilities in other locations nationwide based on the successful partnership with AHRC NYC.

“It’s changed my life as a person and as a leader,” Marc said. “We have created a diverse, inclusive environment that says you belong here as well. I consider the AHRC NYC workers as part of my team and I am proud of that.”

Commissioner Neifeld said that OPWDD and state government are fully supportive of more inclusive workspaces. “Diversity, equity, and inclusion is at top of mind for many organizations, but sometimes we miss the opportunity to include disability as part of those conversations,” she explained. “People with all disabilities are part of the fabric of our community and as they do their jobs it becomes part of our norm.” 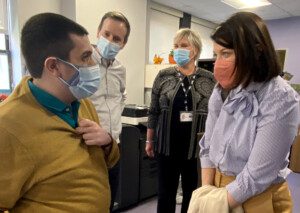 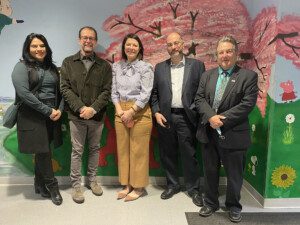