Over the past few months, AHRC Middle High School and Poly Prep Country Day School have partnered in community service initiatives featuring students with and without disabilities working side-by-side to improve their neighborhoods. During the MLK Day of Service, for example, the two schools worked together to donate over 1,500 individual items of food and drinks that were then delivered to a shelter 10 minutes away from Poly Prep’s Dyker Heights upper school. The partnership is made possible through Karen Zuckerman, Director of Community Partner Engagement. 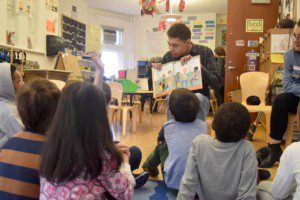 The two classes were split into four groups where the MHS students read a Newberry Medal-winning book entitled Last Stop on Market Street, written by Matt de la Peña and illustrated by Christian Robinson. The book tells the story of CJ, a boy traveling to a soup kitchen with his grandmother and the precious moments of natural and humanistic beauty they encounter along the way. The MHS students encouraged the kindergartners to share their thoughts about important moments in the book, how hunger affects those in need, and their personal experiences with traveling in the city.

Later, MHS student Andy assisted several of the children with packing up additional food that had been donated by families at the school. Andy helped divide the food into two containers filled with cans and boxes, respectively. All of the students then gathered for lunch in the Poly Prep cafeteria. MHS and Poly Prep are excited to continue this partnership through the rest of this school year and beyond! 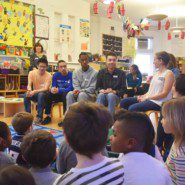 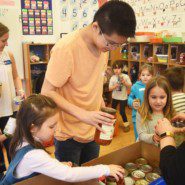 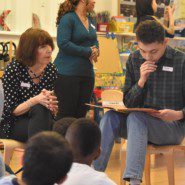