A desire to help others brought him to AHRC New York City, but it was fate that brought Yusaf Gussine-Thomas, Job Coach, back to Fort Totten in Queens. 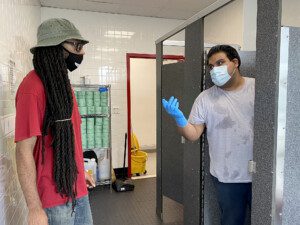 “My father had just retired from the FDNY when I started working over here,” Yusaf said. “Either way I would have been over [at Fort Totten] because he was trying to get me a job with the fire department.” AHRC NYC’s Hudson River Services assists the FDNY, EMS, and others at Fort Totten with maintenance and upkeep tasks throughout the campus. Yusaf supports these dedicated workers by assisting them to complete their daily tasks in whatever way they may or may not need help, keeping them focused on their employment goals, and by being a supportive colleague to the workers whenever they need it.

He has no regrets about his choice to join AHRC NYC instead of following in his dad’s professional footsteps. “This is just something I like to do, meet the different personalities and stuff like that. I’ve always told my supervisor [Belma Dautovic] that this is the only job I’ve actually enjoyed doing. I can’t explain it. I’ve worked security, I’ve done UPS, but this is my favorite work I’ve ever done.”

“I Never Get Bored”

Yusaf was initially introduced to supporting people with disabilities through his mom’s work at another agency. “I was young, and she said, ‘you’re looking for a job, you can do this.’ They would go away for a couple of months to a camp upstate and we’d take care of them all day. It was a much different experience than what I do now.”

After switching careers and trying to find what suited him best professionally, a friend called and told him about AHRC New York City. “I knew that this is the kind of work I really like to do, so I thought I would give it another try. I’m glad I did because I’ve never been happier at work.”

Yusaf enjoys the built-in variety that his job position and location provide. “I support four to five different people per day,” he explained. “The thing I love about working here is that I can bounce around from building to building. I never really get bored.”

He employs several strategies to encourage and refocus the workers he supports. “I job coach, but I don’t smother them,” Yusaf said. “I try to talk to them about things that I know interest them before redirecting them to complete their work. I work with them how I would want to be coached.”

Yusaf is greatly appreciated by both his FDNY colleagues and the HRS workers he sees each day. Zulficar Ali, Senior Coordinating Foreperson for the FDNY at Fort Totten, said he relies on Yusaf to be his eyes and ears when he can’t be around. “I supervise all of our local sits in Queens, so I can’t always be at Fort Totten. Yusaf is here almost every day though—if there is a problem at one of the buildings, he calls me, and we can come and fix it. He makes my job easier just by being here.”

Yusaf trades friendly barbs with Jamielle King as he cleans the EMS training buildings, but their mutual respect is evident. “Jamielle, one of the top workers here—he’s the first to be called on if someone calls out. He has a great support system behind him, too.”

Jamielle smiled as Yusaf spoke, adding “There’s a lot of job coaches that do their job, but you really do your job, man. I live in Brooklyn and commute two hours each way to get work. I’ve been offered positions closer to home, but if I leave here, will it be the same? I’m more comfortable staying here working with people like Yusaf.”

It’s connections like those that have reassured Yusaf of his decision to join AHRC. “This is obviously work, but a lot of the time it doesn’t feel like work because I like it so much.”