“PII is built around services ACCES-VR provides,” said Hannah Millson, Coordinator for PII. “We’ve worked closely with them to figure out the best way to serve our interns. It’s been a testament to our collaboration that we’ve made it work, and now offer competitive paid internships with the resources that we have.”

A Steppingstone for Work

In 2018, AHRC NYC received a three-year, $500,000 grant from the Taft Foundation to work in partnership with New York City DSS Office of Disability affairs to launch a NYC government internship program for people with disabilities. Last year, due to the success of the program, the Taft Foundation extended the grant for another year. 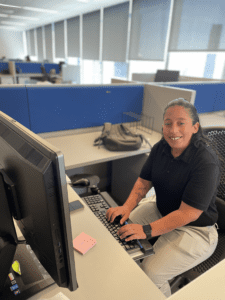 AHRC NYC works closely with like-minded organizations, such as the government, other disability services providers, and social services groups, to offer internship opportunities to a broad cross-section of candidates.  “We partner up with city agencies to learn what opportunities they have available and share them internally and with other service providers,” Hannah said. “Our goal is really to get the word out to our communities about these opportunities.”

PII views its mission as a win-win for government and for interns coming to work. For government, Hannah explained, it’s changing workplace culture to reflect inclusiveness, showing what it means to hire people with disabilities, and providing the city with highly qualified, dedicated interns who serve all of us. Furthermore, the interns often work in agencies with the highest need for quality service, including transportation, homeless services, and social services.

Hannah added, “Historically, it’s a challenge to break into civil service, especially for people with disabilities. PII is a great way for our interns to get experience in government work, and a great way to learn how to network.”

Once PII learns about an opportunity, several screening interviews are conducted with prospective candidates. “We meet with candidates to see if they have the qualifications, if they have prior relevant work experience, if they’re ready to go into the office, or if maybe just needing an extra stepping stone before full-time work.

I think that’s the success of the program—we spend a lot of time building these relationships, then we provide support throughout the internships.”

The wide-ranging support includes a one-on-one meeting each week per intern, to troubleshoot issues they may run into during their work week. PII staff members also provide support to supervisors and management, such as a handbook in disability etiquette.

“We can teach employers about reasonable accommodations. We explain what is needed when working with someone on the spectrum to make sure they are comfortable going into it.”

The program has set up workshops with representatives from the Department of Citywide Administrative Services, financial counselors, and employees from the Mayor’s Office for People with Disabilities.

Hannah said that PII is shifting perceptions of both disability employment and government work. “Our interns are some of the hardest working, most loyal workers. They bring an amazing perspective, willingness, and excitement to work. That’s not always the case for civil service employees. We had one supervisor say that it reinvigorated her own work to host an intern. It allowed her to reintroduce herself to her own work and to rediscover her love for what she does.”

“Seeing someone hired is the best part of the job,” Hannah said. “I’m honored to be able to connect the dots for people. Sometimes you just need a little bit of networking to get your foot in the door and that what we’re here.”