Soaring on the Job at Barclays Center

Brooklyn resident Miguel Mondesir had tried a variety of temporary jobs as a caregiver in a nursing home and a messenger in a medical office. Both positions lasted less than a year. But working for Levy Restaurants at the Barclays Center since 2012 when the arena opened, has been a dream job. 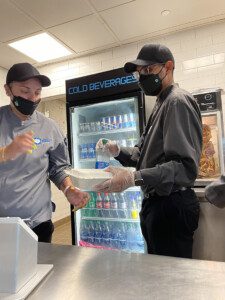 Miguel Mondesir, right, hands an order to a co-worker at the Barclays Center concession stand

To maintain his employment, Miguel learned to overcome his social anxiety, while adapting to the multitasking required for his position.

While Miguel and the others from AHRC New York City’s Employment Business Services were paid throughout the pandemic, they said they missed their colleagues, interacting with fans, and the Levy employee “family meals.”

When COVID-19 restriction began to ease in the spring, Barclays Center reopened and AHRC NYC workers, most of whom work as concession counter associates for Levy Restaurants, were brought back to work after nearly a year away from the arena.

“I thought Barclays would never open back up again after COVID,” Miguel said. “Working in a place where you enjoy the work is the best feeling.”

The partnership’s impact with AHRC NYC has changed lives. Prior to Barclays Center opening its doors in 2012, the leadership team (including Levy Restaurants, AEG, Brookfield Properties, and Brooklyn Sports & Entertainment) met with AHRC NYC and asked how to give back to the local community, and make a difference for people with disabilities. Before a single hire was made, Barclays Center and its stakeholders committed to including people with disabilities throughout their candidate pool.

More than 75 people with intellectual and developmental disabilities (I/DD), who receive support from AHRC NYC, have joined the workforce since Barclays Center’s opening. On any given event night at this large arena, the workforce need is substantial. Out of the nearly 1,000 team members who ensure a great guest experience, nearly 5 percent of these are individuals with I/DD. Employment has changed these workers’ lives for the better, increased their self-esteem, and given them pride in being valuable members of these teams.

“We believe strongly that every individual who has the desire, motivation, and the drive to contribute deserves a chance to be a part of the Barclays Family,” said Chris Giacalone, Vice President of Hospitality and Strategy for Levy Restaurants at Barclays Center. “Without hesitation, every single individual we have been lucky enough to partner with from AHRC NYC meets all those criteria.” 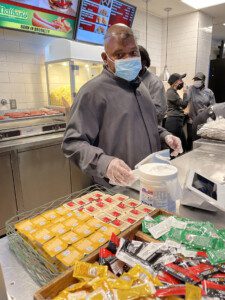 Tosheba McDowell, also of Brooklyn, is thrilled to be back on the job. “Sitting home and not doing anything is not fun,” he said. Tosheba said that “it was boring and I felt unproductive,” and that he spent most of his time watching TV and eating.

Before joining Levy Restaurants at Barclays Center in September of 2016, Tosheba worked as a bagger at Stop & Shop for 11 years. At the arena, Tosheba has learned valuable and necessary workplace skills, including accepting supervision, time management and independently managing his schedule, as well as a variety of hospitality and customer service skills.

Barclays Center and Levy Restaurants’ management believe that having a diverse workforce, including people with autism, benefits the arena and its guests. “Everyone is treated equally with respect and dignity,” said Jose Valentin, Senior Concessions Manager. “We like that we come together as one big happy family. Diversity at Barclays Center is an essential component that embodies the spirit of the local community we represent and entertain.”

“The careers provided by the Barclays Center since it opened have assisted over 75 New York City residents to become actively employed, productive tax-paying citizens,” said Steve Towler, AHRC NYC’s Vice President of Programs and Business Development. “This helps set them on a path of future success leading toward self-sufficiency and life-changing opportunities.”

“Our company benefits, but most importantly our guests benefit, from having these incredible members of our community enhance a fan’s experience,” Chris said. “Their interactions are always genuine and meaningful and they are diligent in their responsibilities. We simply could not perform as well as we do without our partners and team members from AHRC!“