Teaching Dancer Celebrated by His Peers and Staff Members

Ervine Haskin’s family and friends celebrated his 29th birthday with a small get-together showcasing Ervine’s skill for teaching and performing dance and the debut of a short film celebrating his personal growth and achievements. The event was held at Theatre Mitu, a Parks Slope-based theater company.

“Dancing has always been Ervine’s passion,” said his brother, Murdock Haskins, adding that music formed an integral part of their upbringing. Ervine has translated his personal passion into an educational tool and a job, to the great admiration of Murdock and others.

“People just like Ervine and to be around Ervine. That is his gift,” Murdock said.

Unlocking a Skill for Teaching 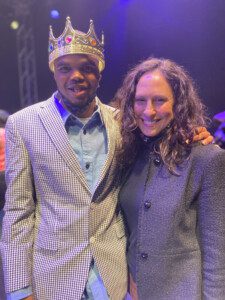 “I was running late for class and wondering what to have the students do until I got there,” Stefanie recalled. “I asked the staff to have Ervine take over until I got there. When I walked in, he had taught the entire class a dance from a Beyonce video.” As the music boomed in the background and she watched Ervine lead his cohort, she had an epiphany. “I realized that he could teach his own dance class. We arranged four trial classes after that, and everybody loved it.”

Everybody in Ervine’s life says he has blossomed since he began choreographing and instructing. “When Ervine is teaching dance, he feels like he has control and can impart that to other people,” said Pilar Jones, Program Director at Employment and Business Services-Brooklyn.

A couple of years ago, Ervine experienced profound sadness after the illness and death of his mom, Shirley. He frequently relied on his sisters and trusted staff members for support. Kenneth Dale, a Direct Support Professional, said that Ervine needed to find an outlet for his grief and to focus on something that always brought him joy. Dance, and particularly sharing his gift with others, has proven to be that outlet. 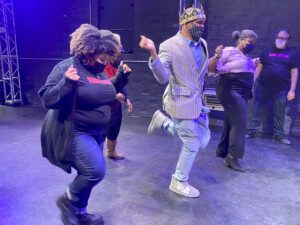 “Whenever I get mad, I dance,” Ervine said. It helps remember the most influential person in his life. “My mom is the person who taught me how to dance.”

Ervine’s peers were thrilled to celebrate his birthday and his accomplishments as a teacher.  Dominique Clark said that he was “like a brother” to her and was proud to see him achieve his dreams. Victor Carrion compliment Ervine’s teaching abilities, saying he made the classes fun. “He encouraged us to never give up,” Victor added.

Staff members who have supported Ervine for years have felt fulfilled by observing his growth. Seeking to further encourage his passion, Yuliya Khripunkova gave him a fitting birthday gift—a small, portable, waterproof speaker that can connect to Ervine’s phone, so he never has to stop dancing.

“He’s learned to become more professional and to be open to adjusting his schedule, if necessary,” Pilar said. “I know he’s gotten better about change and so many other things. You’re watching someone grow when you never expected them to.” 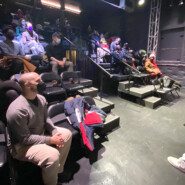 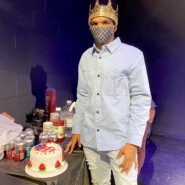 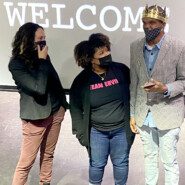 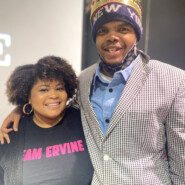