After a year like no other, an event like no other brought together athletes, entertainers, and valued corporate partners for another night of supporting people with intellectual and developmental disabilities. The Thurman Munson Awards supporting the AHRC NYC Foundation raised more than $450,000 to support programs for people supported by AHRC New York City. You can watch a recording of the event here.

The honorees this year were:

Luke Voit said he was honored to join some of the dozens of Yankees and New York sports legends that have received the Thurman Munson Award during its 41-year history. “It’s mean that a lot to partner with AHRC this year because my little sister has disabilities too, and to have the resources they do and they’ve helped so many people with intellectual disabilities. The work they do in the five boroughs is great. That what makes this award closer to my heart.”

The MC of the proceedings was Andy Adler, PIX11’s Lead Sports Anchor, who promised “a special night celebrating some remarkable people and a cause that truly changes lives.”

This year’s Munson Dinner began with a solo acoustic performance of The Beatles’ “Yesterday” by AHRC NYC’s CEO, Marco Damiani, followed by a song from the Our Broadway program founded by Dale Hensley.

“The annual Thurman Munson Awards make a tremendous difference in our ability to help people with disabilities realize their potential and have their potential recognized by others,” Marco said. He introduced several videos that showcased AHRC NYC’s uncompromising dedication during the pandemic. “We’ll tell you the stories of how we have continued to work, to teach, to live together, to help families, and to connect with and support one another.”

The videos highlighted Hudson River Services at Cadman Plaza in Brooklyn, Adult Day Service’s staff member Jose Espana’s interactions with family members in the community, and Camping and Recreation‘s weekly virtual dance parties. Joe Antcliff, Recreation Supervisor, serves as the DJ for the dance parties and lent his talents to close out the Munson Awards as well.

Congratulations to everyone involved in making the Munson Awards an annual success, including Diana Munson, Thurman’s widow, and the staff of the AHRC NYC Foundation: Jennifer Goodwin, Dianne Gomez, and Karen Burke. 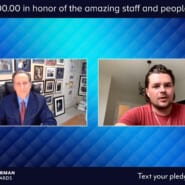