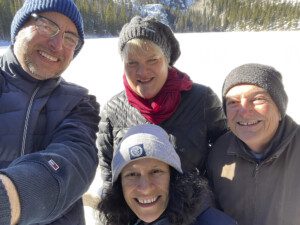 The Arc of the United States, AHRC New York City’s national partner for disability advocacy, held its first in-person National Convention since 2019.  Colleagues from Alabama to Alaska met in Denver, CO for the first widespread gathering for the organization since the COVID-19 pandemic upended all of our lives.

AHRC NYC leadership and staff members were on hand to see Laura Kennedy elected President of The Arc’s Board of Directors. Laura, a Staten Island native, is a parent advocate and a past President of both AHRC NYC and The Arc New York, our statewide affiliate. 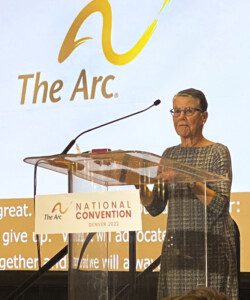 Laura J. Kennedy, President of The Arc of the United States

“We have much work to do, and I am confident we will do it,” Laura said. She encouraged attendees and members of the public to view The Arc’s public policy and legal advocacy statements, outlining the organization’s goals in Congress and the courts in the challenging years to come.

“The spirit and energy of our founding families are embedded in our work and represent our grassroots efforts today.  You in this room and all the people in Chapters across the nation are working to continue our history,” Laura said.

“There is no doubt, nor can there ever be a doubt, that The Arc continues to be the leading force in the fight for human and civil rights for people with IDD. Our strength is in our families, self-advocates, and dedicated staff!  My daughter Julia and my family are the beneficiaries of the strong advocacy and commitment of The Arc. Thank you, Arc.”

The opening general session centered on the theme “Resilience and Hope in the Face of Inequities.” Parents, advocates, and professionals gave firsthand accounts of how the pandemic created new challenges and new opportunities. Sue Swenson from Inclusion International spoke inspirationally about her group’s efforts to assist institutionalized people with disabilities in the aftermath of the war in Ukraine.

“The biggest challenges will come after the war ends,” she said. “Ukraine will have to think more deeply about what should be happening for people with disabilities, as their human rights dictate.

The Arc of the United States, AHRC NYC’s national partner for disability advocacy, held its first in-person National Convention since 2019.

Bethany Lilly, the Arc’s Senior Director of Public Policy, and several of her colleagues provided updates on key federal legislative issues and upcoming Supreme Court cases that may drastically alter the disability rights landscape. A major forthcoming SCOTUS decision to watch is Health and Hospital Corporation of Marion County, Indiana v. Talevski, which may determine if nursing home residents/their families can sue providers in federal court.

Legislative issues at the forefront include amending SSI asset limits, eliminating marriage penalties for people with disabilities, restricting the use of restraints in schools for students with disabilities, and formally professionalizing direct support roles with the Department of Labor. Held just days after the most recent Election Day, Bethany said that voting rights have never been more important to exercise.

“The biggest takeaway from the election is how close so many of the races still are days removed from Election Day,” Bethany said. “It shows how much every vote counts.”