Dancing, smiling, chanting, and good cheer were readily apparent on Sunday, June 24th as for the first time ever, AHRC New York City marched in the LGBTQ Pride Parade. Millions of onlookers lined the streets throughout the day to view the colorful costume and floats that have become staples of the annual celebration of gay rights and culture. 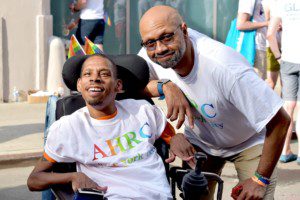 AHRC NYC began its march in the late afternoon, starting on 15th Street between and 8th and 9th Avenues before heading down into Greenwich Village, the cradle of the LGBTQ rights movement. The route snaked towards Christopher Street and West 8th Street before concluding on 29th Street and Fifth Avenue.

Getting the Party Started

March attendees, who included staff members, family members, and people supported from all five boroughs, began the day with a pre-parade party at Employment and Business Services-Manhattan. Hayden Nero, Client Service Coordinator at William F. May Day Services, DJed the party, spinning dance classics from LGBTQ icons such as Cher’s “Believe” and Sylvester’s “You Make Me Feel (Mighty Real).”

Sandwiches and snacks were available to fuel up for the march. Guests also used the time to create rainbow-colored signs for the parade with slogans such as “RESPECT,” “KINDNESS,” “UNITY,” and “Proud to Be Me!” Marchers then walked up to the parade meeting spot together at around 5:00 p.m.

“I Hope This Is the First of Many”

It was an inspiring day for many AHRC NYC staff members. 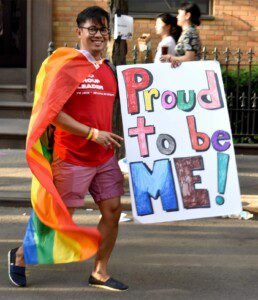 Sacha Amry, Assistant Director of Camping and Recreation, attended the parade with his husband. “Since our mission is empowering people with disabilities, I think it’s important to celebrate the diversity of our individuals and staff,” he said. “We’re one of the few agencies representing people with disabilities in this march. I hope this is the first of many pride parades for us.”

“Our participation in the march this year was truly historic–the first time that a group of people with developmental disabilities have marched in the LGBTQ Pride March in NYC (and possibly anywhere),” Tarlach Nepomuceno, Facility Director of William F. May Day Services, said. Tarlach has been an active participant in LGBT movements for decades. “The excitement and energy were palpable, and there were feelings not just of pride but of joy and exhilaration. This was best expressed by one of our marchers responding to the roar and cheers of the crowds by spontaneously somersaulting and doing cartwheels as we passed by the Stonewall Inn, the site of the 1969 uprising which ignited the worldwide movement for LGBTQ rights and equality.”

Thanks to everyone at AHRC NYC who helped organize the day and to everyone who came out to celebrate Pride! The agency is looking forward to next year’s parade, which will coincide with the WorldPride NYC festivities and the 50th anniversary of the Stonewall Uprising. Over 4 million people are expected to attend, and we hope you’ll be one of them! 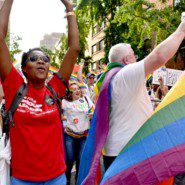 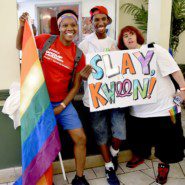 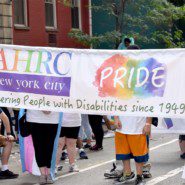 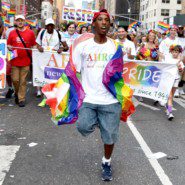 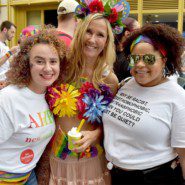 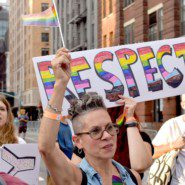 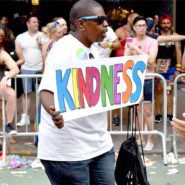 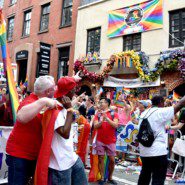