On the evening of Monday, June 9, 2014, AHRC New York City staff, people receiving services through AHRC NYC programs, family members, and invited guests came together at AHRC NYC’s Betty Pendler Day Services to celebrate 66 years of accomplishments in the field of services for people with disabilities. The 65th Annual Meeting continued the long-standing tradition of recognizing those who carry the agency’s mission forward, using their talents to make the world a better place for people with disabilities, and their families.

“The laughs and the smiles, and the joy that I see at this meeting are impossible to find anywhere else,” said AHRC NYC Board member and event Chairperson, Anthony Lazanas, while greeting the audience. “There is the pure joy of knowing we’re doing the best we can in helping people to achieve their dreams and to fulfill their potential to contribute [to their communities]. We should not forget that for every smile, there is a tear and a struggle that someone is facing right now… That’s why we’re so blessed to have these wonderful families around us, to give us the strength to fight and come out on the other side smiling.”

Following some words of encouragement from AHRC NYC Board President, Laura J. Kennedy, and AHRC NYC Executive Director, Gary Lind, the evening continued with accolades for the people who help to make our organization strong, and meaningful.  Awardees from AHRC NYC facilities across the five boroughs appear below.

AHRC NYC congratulates the recipients of this year’s Awards to People Receiving Services: 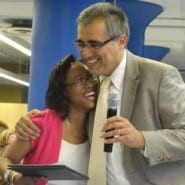 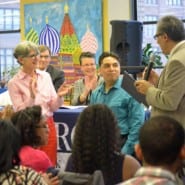 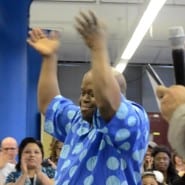 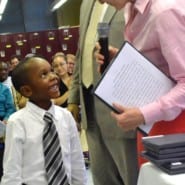 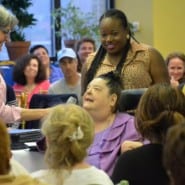 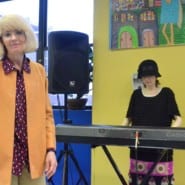 Tara Fialco, who attends AHRC NYC’s Super Saturdays recreation program, was joined on the stage by Christina Conroy, Assistant Group Leader, Super Saturday program, Camping and Recreational Services, who introduced Tara to attendees and invited everyone to listen to Tara as she brilliantly played the songs Let’s Go Fly a Kite and Downtown on the piano.  Tara is a self-taught pianist, who learns songs by ear and practices until she knows how to play them.  Christina supports Tara through the Super Saturday program, and both Christina and Tara received awards during the event.

AHRC NYC congratulates the following staff, who were honored for their outstanding work: 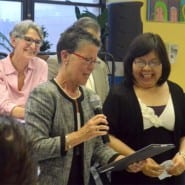 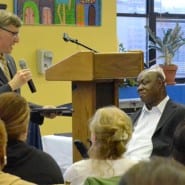 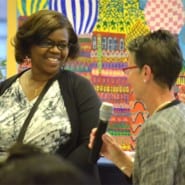 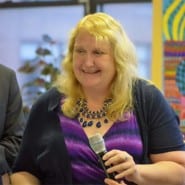 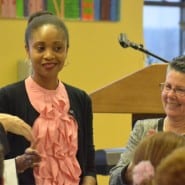 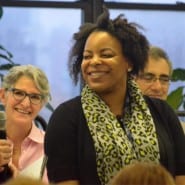 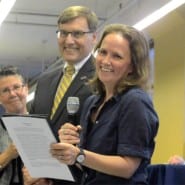 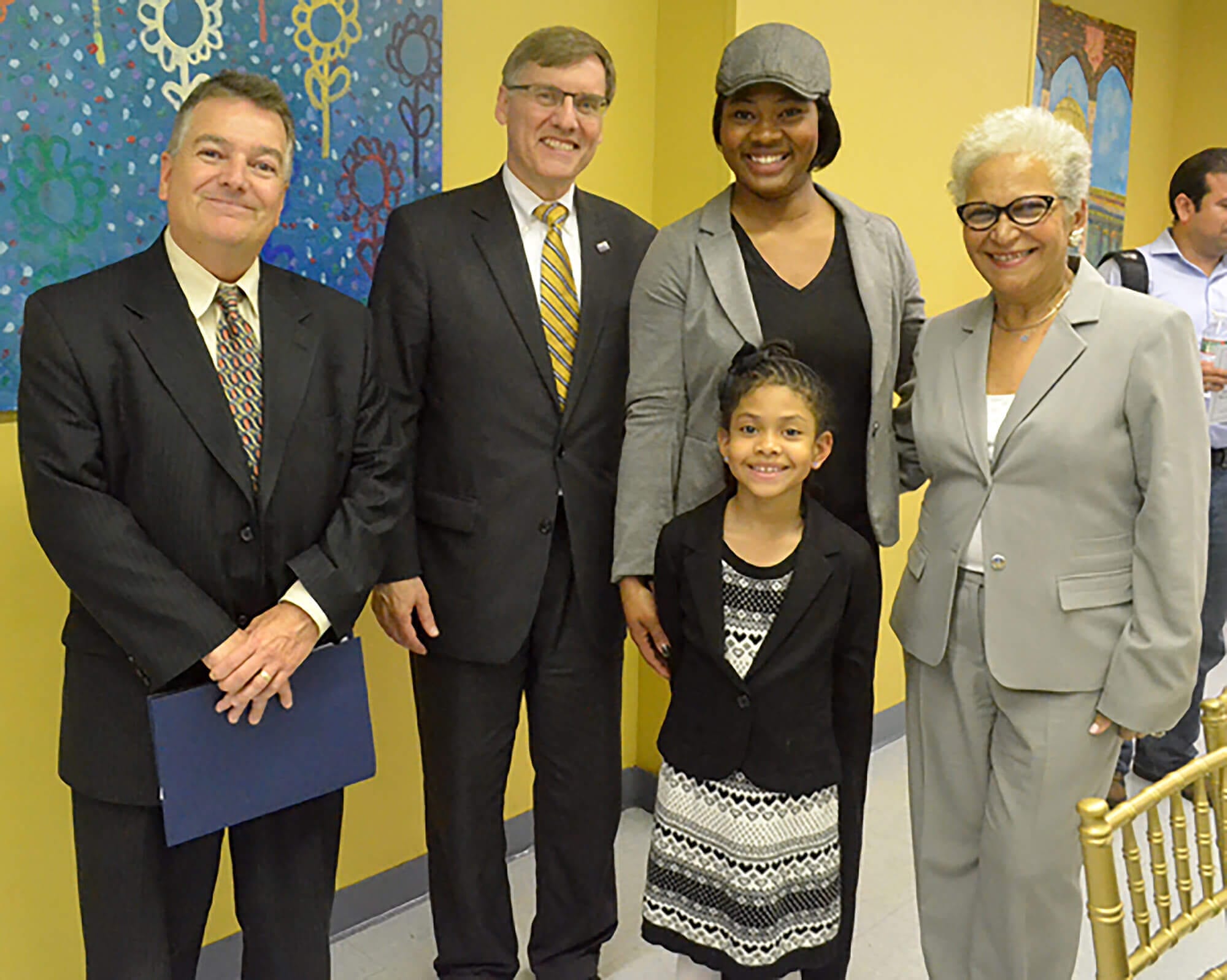 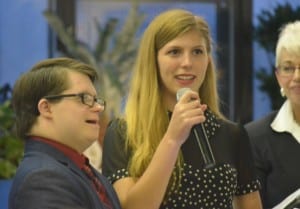 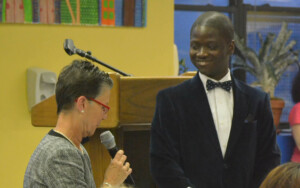 Each year, the Helen and Jack Gorelick Sibling Scholarship is awarded to brothers and sisters of people with disabilities.  We congratulate this year’s recipients, Kenji Fujitani and Lindsey Ottesen.  The Melissa Riggio Scholarship, named for AHRC NYC’s college programs, was awarded to Ousmane Kone and Beverly Love. 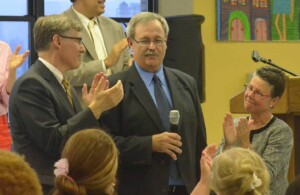 John Flaherty has worked as the Director of AHRC New York City’s Residential Services department for over 21 years. During this time, he has made an important difference in thousands of people’s lives, especially the individuals and the families we support and all of his many colleagues at AHRC NYC. “It’s been a real honor to work here for all of these years,” said John. “And it’s been a blessing to work with all of the individuals, Board Members, families, and all the staff of the department.” John’s leadership and commitment to our mission will be sorely missed, and we wish him all the best.

Each semester, a group of Pace University students are paired with people receiving services through AHRC NYC programs, to collaborate on projects which benefit both parties. Since its inception in the fall of 2007, more than 200 Pace students and 200 people supported through AHRC NYC programs have participated in the service-learning partnership. Dr. James Lawler, Professor of Computer Science and Information Technology, Pace University’s Ivan Seidenberg School, (who founded the partnership with AHRC NYC Board Member, Dr. Marilyn Jaffe-Ruiz,) was honored for the opportunities he has offered to his students and to people with disabilities. “Of course, this is shared with all of my students,” said Dr. Lawler, accepting his award. “I really appreciate it. Thank you very much.” 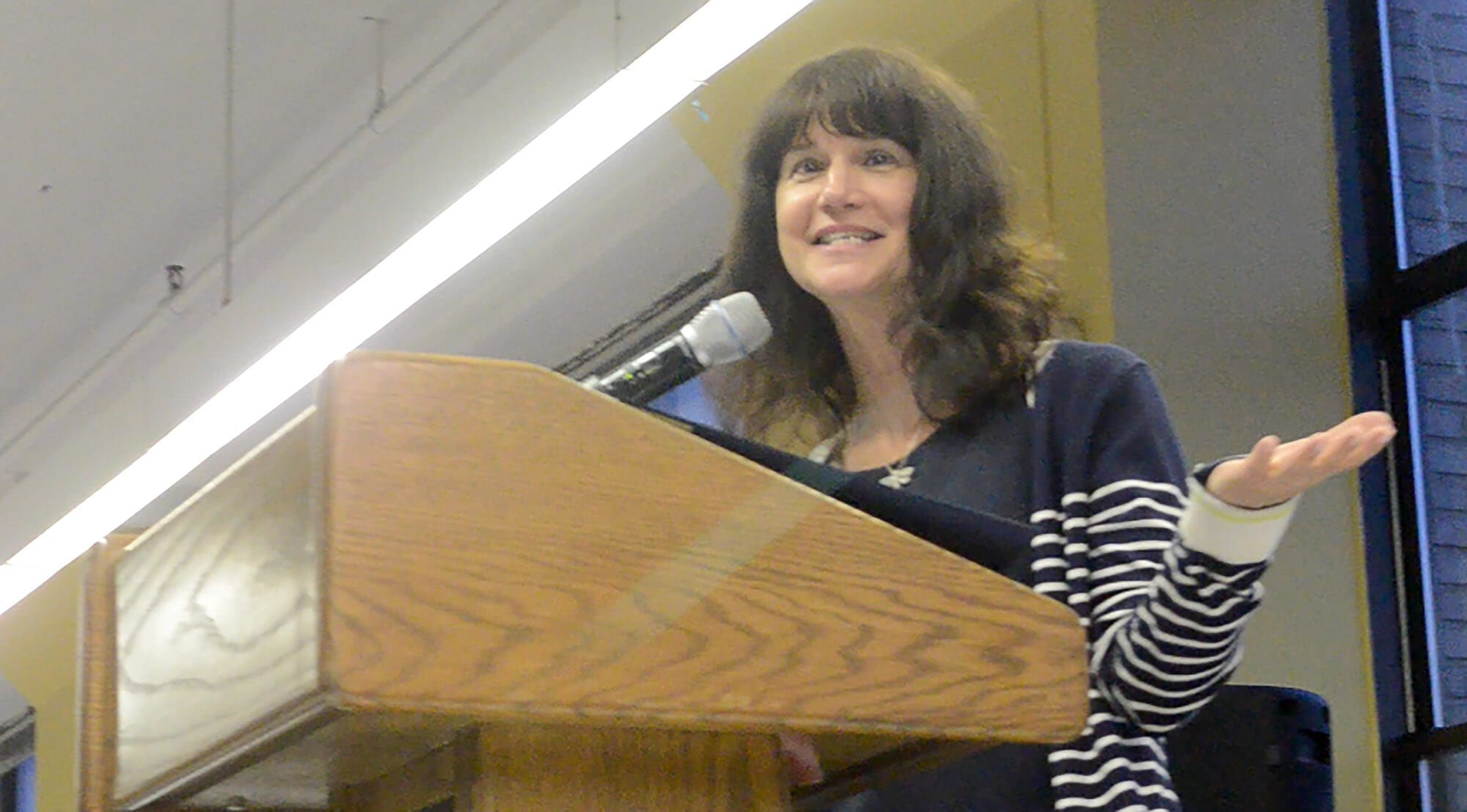 Invited guest, Donna Limiti, Director Region 4, NYS OPWDD, who joined the event to officially install the newly-elected AHRC Board of Directors summed up the evening, saying, “This is incredible. Congratulations to all of the award winners! I want to tell you, AHRC, you have a wonderful family!”

AHRC NYC thanks all who participated in making the evening very special.