An historic investment in human infrastructure that includes salaries for Direct Support Professionals will narrow the economic, racial and opportunity gaps that have existed for far too long, according to a U.S. Labor Department official.

“High-quality care for Americans with disabilities is intrinsically linked to adequate resources for caregivers and service providers,” said Julia Su, Deputy Secretary of Labor, during a White House roundtable with parents and staff from AHRC New York City. “We want to care for those who give the care and receive the care.”

Direct Support Professionals (DSPs) assist people with intellectual and other developmental disabilities with daily activities, employment supports and community engagement.They help individuals gain independence. Over 4.5 million people work in direct support, according to a 2017 workforce report to the President.The majority of DSPs are women and people of color.

New York State’s nonprofit providers employ over 100,000 DSPs. Investing in the care economy is crucial, said Marco Damiani, CEO of AHRC NYC. “The human services field needs greatly enhanced resources now more than ever and deserves recognition for the indispensable value that they provide to individuals with disabilities, families and their communities. The Better Care Better Jobs Act proposes a once-in-a-generation investment that will make our nation a better place to live.”

In New York State, 93 percent of providers have seen a drop in applications in the first quarter of 2021for DSP positions, according to a recent New York Disabilities Advocates report. The workforce shortage adds to uncertainty for people with disabilities and their families. 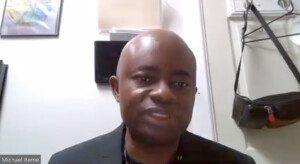 Many DSPs are unable to support their families on their salaries. Michael Iteme, a DSP with AHRC NYC, explained what keeps him in the field for 13 years. “This is my passion – caring for people.”

Iteme, like many in the field, holds two full-time jobs to support his family. “Out of the 80 hours, I work four 16-hour shifts every single week,” he said. “There are some weeks I work 96 hours. It should not have to be this way.”

“We have a crisis that has been escalating during the last 10 years on Staten Island, in New York and across the United States,” said Laura Kennedy, whose adult daughter has a developmental disability and lives in an AHRC NYC group home. Kennedy serves on the Board of Directors of AHRC NYC and the Arc. “The staff salaries don’t match the important work they do. It is difficult to recruit and retain staff.”

Founded in 1948, AHRC New York City is a family-governed organization committed to supporting people with intellectual and other developmental disabilities to grow more independent and lead full lives.