An accomplished artist, Djsaniuka “DJ” Pierre is expanding her talents to new mediums. With the support from Lina Vezzani-Katano, an Art Consultant working at AHRC New York City’s Kings Highway Day Center , DJ is in the final stages of creating her first large-scale mural. The mural is the centerpiece of a restroom remodeling project at M.S. 324, the Patria Maribal School, in Washington Heights. 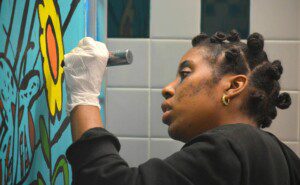 “We’ve been practicing large-scale murals, so she’s not afraid of painting big,” Lina said. The duo has been working together for nearly a year on a variety of art projects. “This is our first trip together where we’ve gone outside of Kings Highway,” Lina said.

The opportunity came about through Jonathan Epstein, Transition Developer. “People supported by AHRC NYC have been volunteering at the school for years,” Jonathan said. “And the people we support have been taking bicycle mechanic classes from a Recycle A Bicycle instructor at the school for quite some time.”

“AHRC sent over volunteers, and Jonathan and Lina came over to discuss how we can improve our school,” Janet Heller, Principal of M.S. 324, said. They identified a somewhat unlikely space, the restrooms, for renewed artistic expression.

“The symbol for this school is the butterfly, and DJ already loves to paint those!” Lina said. “She also loves flowers, so this was a great match.” 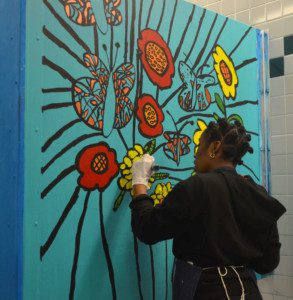 With Dizzy Gillespie playing in the background, giving the workspace a more authentic art studio feeling, DJ diligently outlined the painted flora and fauna with thick black lines. She prefers using bright orange, red and yellow flourishes in her work. Lina would occasionally offer suggestions and advice to DJ, but the vast majority of the mural is DJ’s original concept.

“The mural has taken a long time due to time and travel constraints,” Lina said. Lina and DJ have made around six or seven visits so far, but Lina indicated the project is in its final stages and should be completed within a couple of weeks.

While DJ’s current forte remains painting and drawing, she and Lina are looking to branch out with other mediums soon. “We’ve been putting aside the digital work she does, but I’ve been trying to get her a stylus pen. She previously used her fingers [for digital drawing] but we want to start using more advanced computer programs.” They both plan to make frequent use of the newly-opened ArTech facility at the Howie Stone Center. 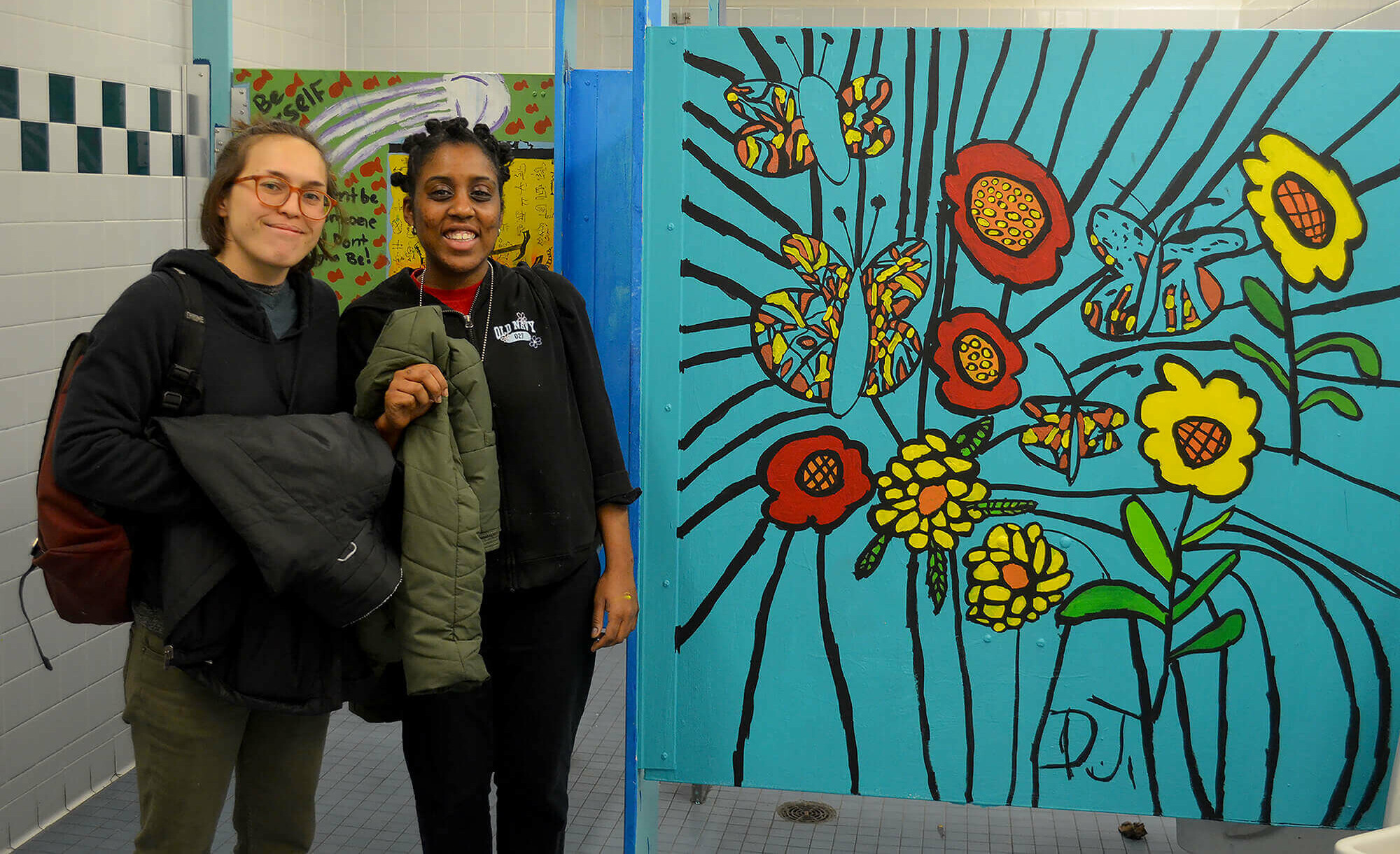 DJ and Lina have been working together for over a year

Early reviews for DJ’s mural have been overwhelmingly positive. “Not only have I seen it and think it’s wonderful, but the children have commented and say that it’s so nice to have a clean, beautiful bathroom,” Ms. Heller said. “They feel that they are cared about and it develops a sense of community and pride.”