AHRC New York City artists are excited to once again be featured at The Other Art Fair at the Brooklyn Expo Center from July 23-25. The Other Art Fair presented by Saatchi Art, gives attendees the opportunity to meet a curated selection of over 130 independent and emerging artists and browse thousands of pieces to suit every budget under one roof. Tickets are complimentary for members of the AHRC NYC family.

These talented creators will be among the dozens of artists featured in Brooklyn.
Read more about their interests, process, and exhibition history: 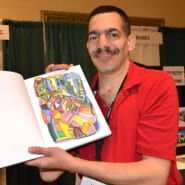 Over the years, Elvin has used countless mediums for making both two and three-dimensional art, (ranging from pastels and watercolors to sculpture and spray paint,) often depicting imagery related to New York City and Puerto Rico. Elvin has had work exhibited at the Queens Museum, among other places. Elvin’s sketchbook series consists of drawings in which he fills in large abstracted figures with pen in painstaking detail until they are completely solid; he can spend days on just one sketchbook page of this kind. While the process may be time-consuming, the result is a flow of textures and patterns that are captivating. When asked where the inspiration for these works comes from, Elvin says, “I made it in my head. It’s in my imagination.” 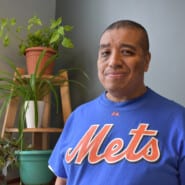 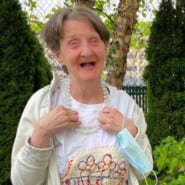 Frances Riordan (1954) is an emerging Bronx-based artist, who works with a variety of different mediums. Often, she makes works that are abstract, full of color, and reflect her positive and bubbly personality.  Frances’ signature style is creating layers of simple geometric shapes. One can notice that she gravitates toward a dark and muddy color palette that juxtaposes with her cheerful persona. Frances is always open to trying new techniques and materials such as assembling tissue paper, adding metallic colors, and exploring art in ways that make her works so unique and diverse.  Franny always takes the viewer’s eye on a one-of-a-kind journey. 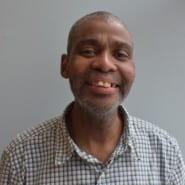 With imaginative compositions that evoke rolling grassy fields or bodies of water, Oswald James’ drawings are bold and unique. Oswald enjoys working with a variety of media including colored pencils and watercolor.  Showing his passion for art, Oswald adds heavy layers of color to paper, joining color fields with tiny jagged edges that suggest movement. He has exhibited his work at Ground Floor Gallery, Raymour and Flanigan stores, the Poe Park Visitor’s Center in the Bronx, and at the New York Public Library’s 125th Street Branch. 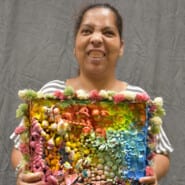 As a mixed-media artist, Maria Alcantara enjoys working with a variety of tactile materials when she creates. Her sculptures are a collage of manufactured and natural elements, selected for their size, shape, and texture. Maria creates her sculptures by stringing donated beads into wires and pipe cleaners, layering canvases and wooden panels heavily with beads of different shapes and colors. Maria also enjoys using oil pastels to create abstract textured fields of color on paper and wooden surfaces. 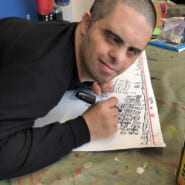 Rayed Mohammad (1986), is a self-taught artist who lives in Staten Island, New York. Using markers, he creates mesmerizing abstract works on paper and found materials. His style is repetitive by nature, consisting of meticulously placed lines. In some of his works, Mohammad adds circles that are linked with his linework. These geometric figures are often interconnected and create what looks like a map, maze, or even a series of neurons connected. Mohammad heavily layers his works adding density to his pieces. These dense layers of lines sit in stark contrast with the rest of the piece, drawing in the viewer’s eye immediately. Mohammad’s unique style is difficult to mistake, his works demonstrate an almost super sensory acuity. The viewer can sense exhilarating energy. In the past, Mohammad’s works have been featured at The Queens Museum, and Ward-Nasse Gallery in Sussex, New Jersey. 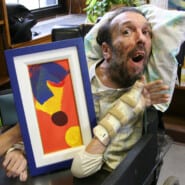 Howie was born prematurely with cerebral palsy and significant intellectual impairments. Through the support of his family and AHRC NYC’s services, he was able to live a rich, fulfilling life up until his tragic passing at the age of 50 in 2010. When Howie was young, he enjoyed the card game, Color Go Fish. Playing the game helped him to learn all of the major colors, which he matched in order to defeat his opponents. Howie always loved art, particularly modern art, and enjoyed visiting museums.  He began to create paintings at an early age, using poster paints and construction paper, with assistance from family members and his health aide.

Over the years art played a major role in Howie’s development and allowed him to connect with peers and support staff on an intimate level. Later in his life, Howie joined with an artist who utilized a technique called A.R.T. (Artistic Realization Technologies) in which an artist is paired with an assistant who facilitates the artist’s creative choices. This process allows artists with mobility impairments to have control over the process of their own creations.