Innocent Obi was afraid of heights but he still wanted to take the Blue Bus to the top of the world. With Annalisa Iadicicco and Sara Galassini steering the ship, however, Innocent knew he had nothing to be worried about. “Three, two, one…LIFT OFF!” Innocent shouted. “Be careful guys, we are going high up.”

Innocent, an Art Consultant based at ArTech at the Howie Stone Day Services, was one of many who let his imagination take him to another world as part of “Be (Y)Our Own Hero,” a collaboration between artists and staff members from AHRC New York City and the Blue Bus Project, a cultural initiative that seeks to bring art to underserved communities. The two organizations were awarded a Neighborhood Grant from the Citizens Committee for New York City to undertake this project. The final session was held on Wednesday, September 26, 2018.

Annalisa founded the Blue Bus Project in 2016. It has previously provided art workshops in communities all over New York City, including Harlem, Williamsburg, and Rockaway Beach. “This was our first collaboration with people with disabilities,” Annalisa said. 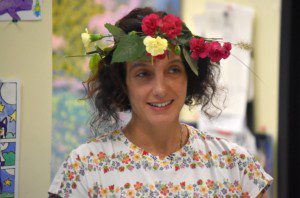 Sara Galassini, one of the founders of the Blue Bus Project

“This was created so that we could explore a specific theme–the theme of the hero,” Sara said. “We explored what we think of when we hear that word and our own qualities that we can get from that word.”

A series of interdisciplinary art-based workshops encouraged participants in the project to open up about themselves in ways that surprised even those that work closest with them. “We learned so much about everyone through this project,” Dhanashree Gadiyar, Project Coordinator at ArTech, said. “They shared personal stories and feelings that none of us had ever heard before. Their hopes, their fears, their dreams, stories about their families—they were all very open.”

“My mother is my hero,” artist Valerie Romero said. “She is always there when I need her and when I call her she always answers my calls.”

An important part of the workshop was the integration of art disciplines, especially those not found on a canvas. “There was a need to do something different than just create and draw, so we used theatre games to spur collaboration,” Annalisa said. Sara mentioned that it was important to remain flexible during the project. “This is an organic process, so even if we had a plan every time we came into the room, we had to keep an open mind about what does it really mean to perform. We always said that sharing themselves in the room together was the main goal.” 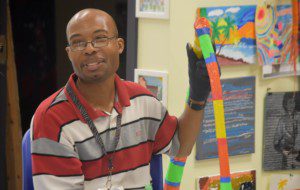 Cory Tyler became the Art Slinger, his superhero alter ego that provides art to the masses using his colorful bow and arrow.

One part of this was creating a unique superhero. Cory Tyler became the Art Slinger. “I use my colorful bow-and-arrow to shoot art to the people,” he explained.

On the final day of the session, Annalisa and Sara tied up the workshop by encouraging participants to use their imaginations as they took a virtual trip together. Group members created custom costumes that reflected their alter egos, recited poems that reflected where they come from, and reminisced about their favorite memories from the workshop.

“Honestly, at first I thought ‘oh no, not another group project,’ but this takes us away from anything that we are going through,” Abraham Roberts said. “It makes us realize that we are not all so different. So I’m happy that I joined this.” 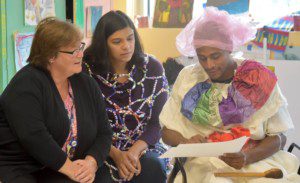 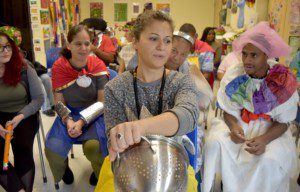 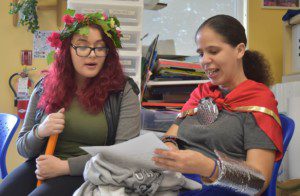