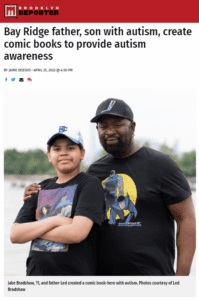 The Brooklyn Reporter published an article about Jake Bradshaw, a student at AHRC New York City’s Brooklyn Blue Feather Elementary School who created a comic book with his father to tell stories using relatable scenarios that are common to individuals on the autism spectrum.

“I took the three hallmarks off autism — deficits in social communication, adherence to routines, difficulty with reading others — and divided them into the three main characters,” said Led Bradshaw, Jake’s father.