September 8th through the 14th is National Direct Support Professionals Appreciation Week, and it is with pride that AHRC New York City celebrates those who support children and adults with intellectual and developmental disabilities in living dignified lives and in contributing to their communities.  This year’s resolution marks the sixth consecutive year of recognition by the U.S. Senate for this essential workforce. 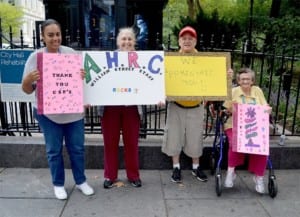 People from AHRC NYC’s Walter and Evelyn Redfield Day Services came out to show their support of DSPs.

Employed by hundreds of not-for-profit organizations across the five boroughs, DSPs are the backbone of organizations in our field, and their dedication and commitment to the people they support goes beyond any commitment to a job.  They are committed to making sure that people with disabilities lead rich lives.

Direct Support Professionals support a person’s most intimate daily needs, such as preparing meals, helping with medications, bathing, dressing, and transportation.  They also provide families of people with disabilities with time to go on errands, or to spend an evening away from home, with the knowledge that their family member’s care is in the right hands. Working in homes, the workplace, and day recreation, socialization programs, DSPs are there every step of the way, to promote meaningful community inclusion.

On Thursday, September 12, 2013, for the second year, DSPs from across the city, people receiving support, and their families gathered on the steps of City Hall in lower Manhattan, to show their support and appreciation for those who have dedicated their careers to performing these vital services.

It was a day to celebrate the trust and communication that underline the relationships between DSPs and those who they support.

The event was organized by the InterAgency Council, which currently represents over 120 member agencies and organizations in New York City, Nassau, Suffolk, Westchester, and Rockland counties.  Elected officials joined in recognizing this dedicated workforce, who have a profound impact on the lives of nearly 100,000 New Yorkers with disabilities.

Direct Support Professional of the Year

Among the direct care workers who were invited to speak about their professional experiences during the recognition event was Serge Kirillov, who supports 17 people with disabilities who work at Barclay’s Center, the Brooklyn arena which opened its doors just a year ago.  Serge, of AHRC New York City’s Brooklyn Hire, was recently named as the 2013 Direct Support Professional of the Year for New York State, by the American Network of Community Options and Resources, (ANCOR).  Many of the workers with whom who Serge works were present at the event, to show their support for him and to celebrate the efforts of DSPs nationwide. 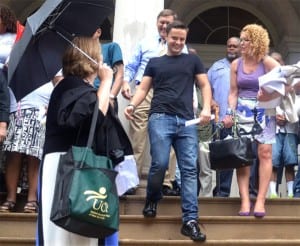 Serge Kirillov, of AHRC NYC’s Brooklyn Hire, was recently named as the 2013 Direct Support Professional of the Year for New York State

“We came to Barclays with trial jobs that were separate from other staff, as condiment stand cleaners, door greeters, and porters,” said Serge to the event’s attendees.  “With time and a lot of hard work, these jobs evolved into full-fledged concession staff duties, a guest service usher position, and full-time porter jobs.

In his role as a Direct Support Professional, Serge has supported people in improving their work skills, and advocating for themselves as they perform their job tasks in the arena.

“We are happy to be a part of a company that provides them with a way to participate in the workforce, which results in self-confidence and the good feeling we all get from a job well done,” said Serge.  “Through my eyes as a DSP, the accomplishments of the people I support through this position feel like my own personal milestones, and with each success in their job, I feel that there is nothing that cannot be accomplished if you set your mind and heart to it.”

We thank everyone who planned this event and those who braved the stormy weather in order to celebrate the important work that DSPs nationwide do each day, to improve the quality of peoples’ lives.