Four years ago, the Richmond County Savings Foundation (RCSF) donated $35,000 to AHRC New York City’s Employment and Business Services-Staten Island. On Monday, February 5, 2018, the foundation announced they would again be supporting the facility by donating $25,000 to be used for technological improvements that can help people to prepare for and gain employment.

“To come back here four years later and see all the great work that this organization has done is wonderful,” said Cesar Claro, Executive Director of RCSF. “Over the course of the past 20 years, this foundation has been proud to have contributed to dozens of Staten Island cultural, civic and other institutions. I can think of no greater investment than to providing education, and training opening the doors to the fulfillment and satisfaction of having a job.”

Steve Towler, Assistant Executive Director, said that EBS-Staten Island alone supports over 500 people in the borough, with AHRC NYC’s other services, including community-based day habilitation and recreation programs, upping that number significantly. He added that the support from RSCF has made this possible.

“Without the foundation, we wouldn’t be able to bring the future to so many people,” Steve said. 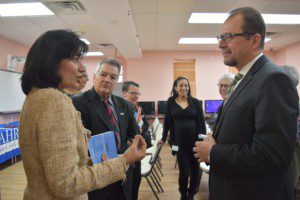 Local government officials attended the check presentation ceremony and applauded the efforts of AHRC NYC and RCSF. Patrick Lewis, Outreach Coordinator from the Office of the Public Advocate, commended a private sector organization for stepping in where the government cannot. Director of Health and Wellness for Staten Island Borough President James Oddo, Dr. Ginny Mantello said that “Technology is the future, healthcare and technology are increasingly linked, and this is a great example of that.”

Part of the grant money will be used to install a virtual reality system at EBS-Staten Island. Philip Proctor, Director of Individualized Technology Strategies, said that VR can be used in a variety of ways to promote employment skills, such as practicing job interviews and simulating work environments such as a restaurant or retail stores.

Salvador Moran, Associate Director of EBS, said that this new technology will provide support to those who need it most. “We serve people with all different ranges of disabilities, but our focus is those with significant disabilities,” he said. “We want to enable them and harvest the power of technology and take them to the next step.”

The check ceremony also presented an opportunity to debut the new expansion to the 25 Victory Boulevard home of EBS-Staten Island. Naira Aslanyan, Regional Director, said that the remodeling work began on December 12th with the goal of creating more open space and more offices. Portions of the grant money from RCSF will be used to improve technology in the new offices, including a TechXpert lab.

“Technology is one of the six main sectors in high demand for a qualified, well-trained workforce; many of those jobs are entry-level positions,” said Naira. “With this expansion, we are confident that our training can help fill many of these good-paying positions.”

The ceremony and expansion brought a variety of experts and industries to EBS-Staten Island, which Marco Damiani, CEO of AHRC NYC, lauded as important. “The people talking here today all come from a different angle and that’s a good thing,” he said. “They are enabling us to provide value to their communities and employ people all across the island.”