Since becoming AHRC New York City’s CEO in late 2017, Marco Damiani has visited several of the organization’s program locations to meet the people who are receiving its services as well as the direct support staff who work each day to support them in building full lives.  In the spring of 2018, while visiting AHRC NYC’s Kings Highway Day Services, Marco encountered an intriguing collection of hand-made sculptures adorning a shelf on the wall of the center’s cafeteria.  Fashioned in colored tin foil, each sculpture called familiar characters to Marco’s memory of the Peanuts comic strips created by Charles Schultz.

“I saw the Charlie Brown sculpture that they have, and also Lucy was there and Snoopy was there,” said Marco, recalling his visit. “I said, ‘I have to have the Charlie Brown [sculpture]!’ One of the staff who was there said, ‘You can have him if you like,’ but I couldn’t break up the set.”

Moments later, Art Consultant, Dean Millien, told Marco that he and the team of artists who had created the sculptures would collaborate to create a replica of the Charlie Brown sculpture so that Marco could have it for display in his office at AHRC NYC headquarters.

“The sculpture we’re working on is a welcome gift for a guy named Marco, who is a part of AHRC,” said Dean, who has worked with the people in his group to create about 12 unique tin foil sculptures so far, including gorillas, lizards, dogs, cats, and bulls. “We want to make him feel welcome, and let him know that we have a community in this section of Kings Highway where we do art.”

Dean has used tin foil as a sculpture medium for his entire life, finding the material useful because it is pliable during the art production phase, but once the foil has been formed into the desired shape, it will hold. In sharing his artistic process with the people in his group, Dean teaches them to build the components of the sculptures over time, working step-by-step to make something wonderful. 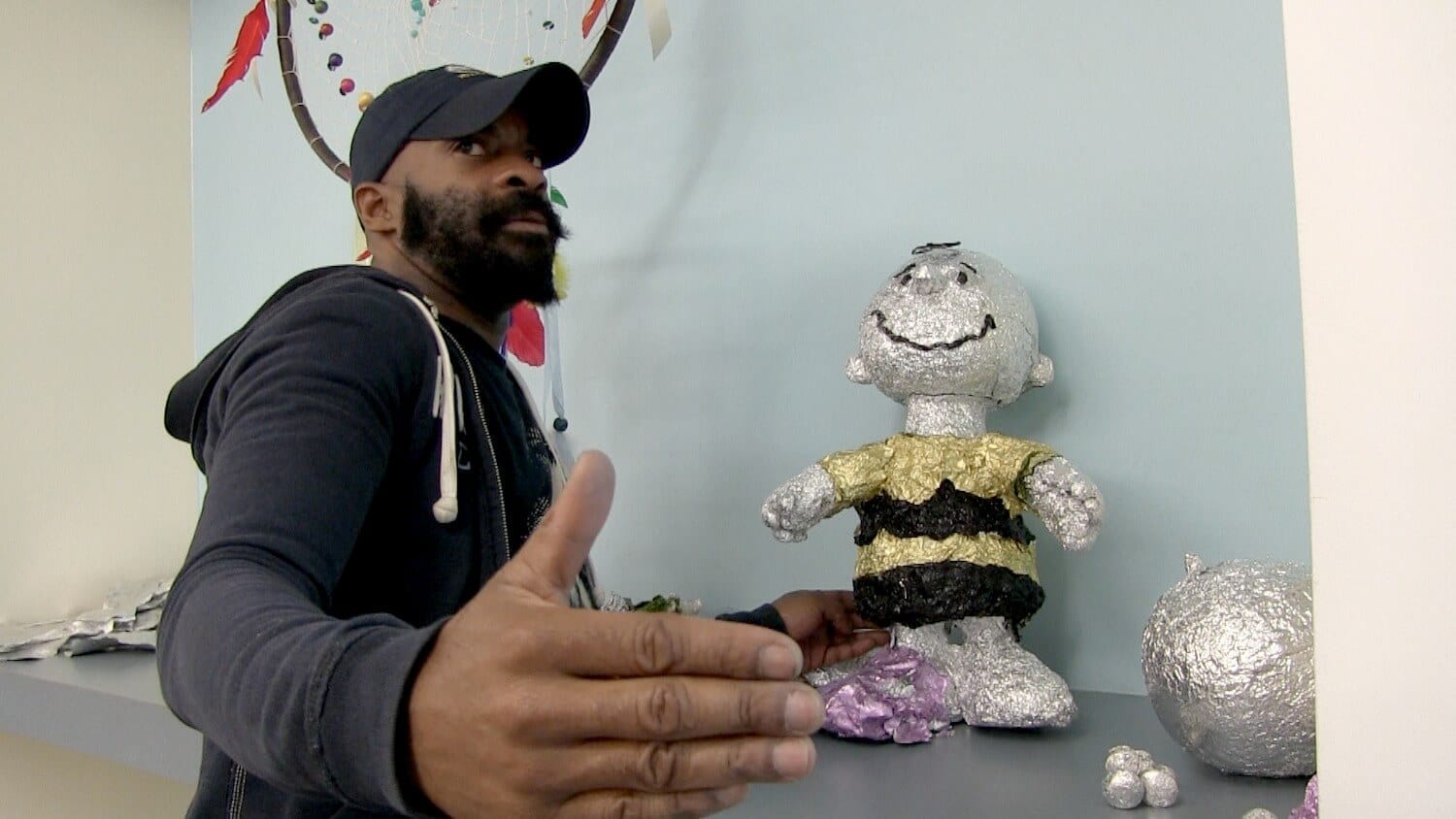 As he adds the finishing touches to the sculpture, Dean explains the process used by the group as they create new works

“One of my main directions is to get them to feel the art, feel the material that they are working with,” he says.  “With foil, you just use your hands.  You just need the ability with your hands and your mind. Once they feel like they can do something, they take it to another level.”

The Sculptors and Their Process 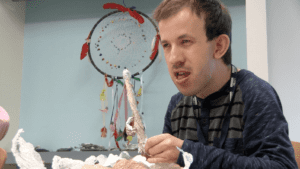 Rachel Aldridge, Victoria Barton, Karaibe Hebbert, Jennifer Merkin, Yevgeniy Vaysman, and Eva Yee are members of the sculpting group at Kings Highway. They use sheets of a generic brand of foil to create their artwork, which Dean selected due to the foil’s softness and color. The same foil can be found wrapped around tiny chocolate eggs during the Easter season, displaying hues of pastel pinks, greens, yellows, and purples that add personality to the pallet of holiday baskets. In order to craft each sculpture, the artists begin by tearing small portions of tin foil from a larger flat sheet.  Next, they use their fingers to roll the foil into small balls that are later added to a larger structure. This stage of production helps them to practice their fine motor skills and gives them an opportunity to work along with their fellow artists.

On Friday, August 2nd, Dean, along with Community Support Professional, Damian Gray, and Karaibe Hebbert, one of the artists who worked on the sculpture, visited AHRC New York City Headquarters with their sculpture gift in hand. As they approached Marco’s office, they could hear the song, Linus and Lucy by the Vince Guaraldi Trio, playing aloud from Marco’s computer.

“Look at all the detail!” Marco said as Karaibe and Dean unveiled not one, but two sculptures. Standing at about 18 inches tall, the foil version of Charlie Brown holds a giant heart.

“We even did his clothes and shirt, with the little design,” said Karaibe, pointing to the zig-zag stripe that surrounds the character’s trademark yellow shirt. Noting that Charlie Brown would be lonely and sad without his old pal, Snoopy, the artists included a second character sculpture as a part of their gift.

“I’m going to put them right here,” said Marco, as he placed the sculptures on the shelf of his window. “Anybody who walks in will see him right away, and then I’ll be able to talk about the amazing work that you guys do.”

Since presenting their gift to Marco, the group has continued to create new sculptures. Having had opportunities to sell artwork and to meet other artists through exhibitions of his own artwork, Dean has experienced success in his own art career, and he says his work with the artists at Kings Highway is an extension of that success.  Dean wants to provide additional opportunities for the artists he supports by finding venues to display their work publicly so that the sculptures can be admired for the works of love that they are.

“Doing this helps me as an artist,” says Dean. “AHRC gave me this opportunity to teach them… It made me a better teacher and a better artist.  I feel that when I go home.  I feel happy.”