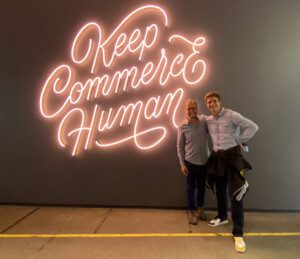 “In France many times people with I/DD will not want to say that they have a disability. We want to encourage everyone to be their true selves,” said Yann Bucaille-Lanrezac, a French businessman who is also involved in I/DD employment services.

Catbird is a jewelry maker with multiple locations in the five boroughs. Headquartered at Brooklyn Navy Yards, the company employs two people receiving employment support from AHRC NYC, with plans to hire one more person soon. 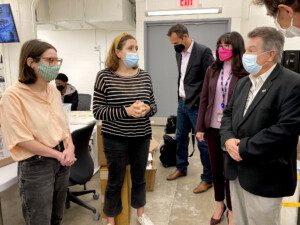 “We’re a company that gives back to our community and wanted to provide workers with these opportunities,” said Airina Cokgoren, Inventory Control Assistant Manager at Catbird. Airina and her colleague, Roseanna Minchak Kilts, HR Manager, said that they were looking for workers who could complete simple yet repetitive tasks, such as filling small jewelry boxes or labeling hundreds of boxes at once, that other workers do not have the time nor patience to complete.

Catbird had not hired workers with disabilities before, which gave EBS an opportunity to educate the company about what to anticipate, and the benefits of having a neurodiverse workforce. “AHRC NYC made it really easy for the transition,” Roseanna said. “A meeting was led by Shauna Lozada and Michele Shapiro about what to expect and differences that can appear like reactions to social situations. We attract socially aware, good people that are into supporting others.” 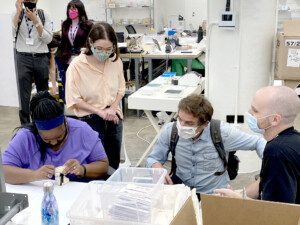 Maximilian Cappelli-King, Job Coach, supports the two AHRC NYC workers on a regular basis, including Courtnie Coles. “I am here to create an equitable situation for Courtnie,” Maximilian explained to Yann and his colleagues. “She works here two days per week. This is her first job, and it’s amazing for her.”

The pair saw firsthand how valued Courtnie is at Catbird when earlier this year she returned for her first day of work since the pandemic began. “They were screaming and shouting and really happy she was back here,” Maximilian recalled. “Everybody likes her a lot. I think it’s really empowering when someone comes up and asks a question that she knows the answer to.”

Maximilian believes it’s important for more companies to do as Catbird has done. “The visibility is huge. The whole point is to create an integrated situation with people with disabilities. Any front-facing situation is good for everybody.”

Yann agreed with Maximillian, stating “You do not often see people with I/DD working out where others can see their work. It’s so important to change people’s perceptions.”

Later in the day, the group traveled from the Navy Yards to the Dumbo section of Brooklyn, where Etsy is headquartered. They were led on a tour of the facility by Megan Saunders, Etsy’s Senior Manager of Workplace Services. 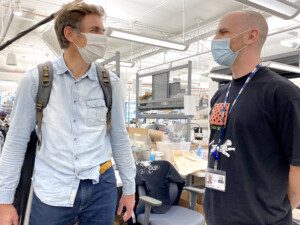 “We have nine floors in this building with two more floors occupied in the building across the street,” Megan said. “We recently reopened to 100% capacity to anyone who wants to come to the office. AHRC NYC has been supporting us from the beginning, assisting us with kitchen and cleaning services.”

Brian Simon said that the relationship began when Etsy hired a person supported by AHRC New York City. The agency later successfully bid on the contracts for kitchen and janitorial services. “It’s been a great partnership, creating a lot of quality employment for people,” Brian said.

Brian’s colleague, Frank Guzman, agreed. “When our workers were out during the pandemic, they would call me every day asking if they could go back,” Frank said. “There are so happy to work here at Etsy and Etsy has been beyond generous. Etsy continued to pay all of their AHRC employees even throughout the pandemic.”

“They couldn’t stop singing the praises of the wonderful and inclusive corporate cultures at Etsy and Catbird, and of course the extraordinary talent of the AHRC New York City staff that help make these collaborations work,” Marco said. “We are fortunate to be giving people with I/DD an opportunity to be productive members of society, working for outstanding companies.”