Margaret Puddington, a parent of a child with a disability and a longtime advocate for people with intellectual and developmental disabilities (I/DD) who has worked closely with AHRC New York City for decades, was among four honorees at the annual Friends of Asha Niketan luncheon. The event was held at Gargiulo’s in Coney Island. 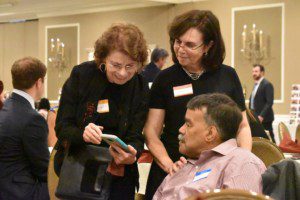 Friends of Asha Niketan is a not-for-profit that for the last seventeen years has been raising funds to assist people with (I/DD) in India. With residences in five of India’s major sprawling cities, the organization founded by Usha Venkataraghavan, a former OPWDD Brooklyn Developmental Center Director known to many in the New York City I/DD community, has annually tapped the generosity of the people in our field to help those in developing nations with far fewer resources.

The luncheon honored three additional people who have dedicated their careers to the I/DD field: 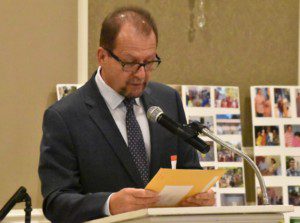 Marco Damiani, CEO of AHRC NYC was among the speakers at the event.

Helena Nichols Brown, a Direct Support Professional, opened the proceedings with a stirring rendition of the gospel hymn “His Eye Is on the Sparrow.” Jivan Ramesh, a prodigy on the cello, entertained guests with his interpretations of some classical cello solo works. Marco Damiani, CEO of AHRC NYC, read a message from Connecticut Governor Ned Lamont, recognizing the great work Friends of Asha Niketan does. Finally, Usha made sure to point out traditional Indian crafts and clothing accessories that were made by people living in homes sponsored by Friends of Asha Niketan that were available for purchase, with proceeds continuing to support the organization.