A Range of Services and Careers 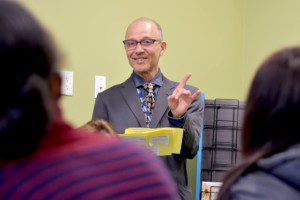 Seth Krakauer, Employee Development Manager, and Andrea Aaron, Assistant Benefits Manager, began the day by giving an overview of AHRC NYC’s history and services. Seth recounted some of his personal background with the agency, which began over 25 years ago as a Job Coach. “I can tell you it takes 38 mini pepperonis to make a Pizza Hut pizza,” he recalled. “Being a Job Coach was one of the best jobs I’ve ever had.”

Andrea made clear that “no matter what your major is, AHRC has a career that can fit your job needs.” Examples of majors in the room included business, mental health services, and education. Those interested in education got a first-hand look at one of AHRC NYC’s preschools with a tour guided by Beth Rosenthal, Principal of Central Park ELC.

“All children that come through here are evaluated first by the Department of Education and are then referred by the district administration to programs like these if they continue to need services,” Beth explained. “Our goal is to bump up their strengths, which is usually their intelligence, to begin with, and prepare them for kindergarten.” 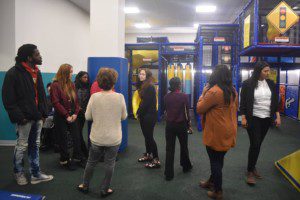 Beth said that the school also focuses heavily on providing a lot of physical activity for the children, supplemented by a nutrition program that emphasizes portion control. “We strive to recognize cultural backgrounds and differences when talking about diet, but we really encourage nutrition because they are so pure at this age,” she said.

Later, Sarah Soriano, Facility Director at Redfield Center, took the Kingsborough students through the day center. Sarah explained the multitude of volunteering, arts, and lifestyle opportunities that are available for people receiving services, including those with significant visual impairments. To finish their day, the students were treated to a brief performance by members of AHRC NYC on Broadway, who sang “Good Morning Baltimore” from their upcoming performance of Hairspray.

“We like to expose students to different things we’ve partnered with this organization in the past and they expose our students to new ideas,” said Marisa Joseph, Director of Career Services at KCC.

One student was overwhelmed by what he witnessed, saying “I never knew there was an organization like this that helps people with disabilities; I’ve always just seen society look down upon them.”

Two students were so impressed that later the same day they attended an open house for prospective employees in AHRC NYC’s Home Care Services department. Career Services said they would love to return with a new set of students in the following semesters.