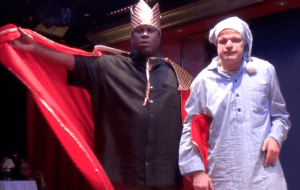 Major McEachin as the Ghost of Christmas Present

For many people, the holiday season evokes images of wintery landscapes, houses adorned with holiday decorations, time spent with family and the exchange of gifts… but for old misers like Ebenezer Scrooge, there’s nothing happy about the holiday season – it’s all just one big “Humbug!” The classic Charles Dickens novel, A Christmas Carol, follows Mr. Scrooge’s transformation from cranky curmudgeon to cheerful charity-giver as the character takes a hard look at his own life and relationships over the course of one fateful night.  The tale has been told in many ways since it was first penned, but one recent performance succeeded in truly capturing the story’s thematic essence, emphasizing kindness and the spirit of giving.

Musical performances held at Broadway’s Jerry Orbach Theater on December 6th and 13th, 2017 once again delighted audiences with the talents of performers with disabilities and professional Broadway actors. The performance marks the third official production of an initiative created by Dale Hensley, Fine Art Consultant, AHRC New York City. “It’s exhilarating for me to see the joy that they get out of singing and performing and learning lines and accomplishing something that maybe they thought they could never do,” said Dale.

Talented Actors in the Spotlight 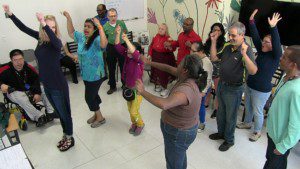 Choreographer, Angie Schworer teaches the performers to dance as they sing.

Dale has acted on Broadway for over 40 years and first began working with people supported through AHRC NYC’s Day Services programs as a community partner.  His earliest efforts involved helping people with disabilities to practice their job interview skills, but following a conversation about his professional work with AHRC NYC’s Director of Community Partner Engagement, Karen Zuckerman, Dale began sharing his theatrical knowledge to help people to express themselves creatively. After a few months, Dale was hired by AHRC NYC, and he now works with people at AHRC NYC’s Walter and Evelyn Redfield Day Services and at Betty Pendler Day Services, rehearsing songs and lines from various theatrical productions, focusing on each performer’s unique abilities, all of it leading to public performances. 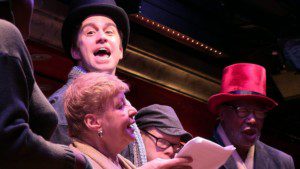 “I have been singing for a long time, and I love to act,” said Natale Miceli, who played the lead role of the musical, Mr. Scrooge, who is visited by his departed business partner, Jacob Marley, played by Rivelino Lucas and the ghosts of Christmas Past, Present, and Future, played by Martin Neal, Major McEachin, and Jamel Mills.

“It was the most profound experience I’ve ever had in a theater,” said Bradley Dean, Actor, Dear Evan Hansen, describing his first impressions from one of the group’s early public performances. “It was just this perfect little moment of everything that I love about theater.”

Dale Hensley is also working to enhance the lives of professional Broadway actors, choreographers, wardrobe designers, and musicians, who he has invited to attend rehearsals, where they practice songs and lines alongside performers with disabilities, working together to create a collaborative final performance.

“Music is a universal language. Everyone can relate to it on some level. It allows these people to interpret characters and bring some more of themselves [into their performances],” said Judy McLane, Actress, Mamma Mia, who has shared her expertise with the performers since the project’s inception in the spring of 2017. “In all of them [the performers] there’s a spark that’s happening. It’s the gift that gives back, for me. I get just as much back, passing the joy back and forth when we’re rehearsing.” 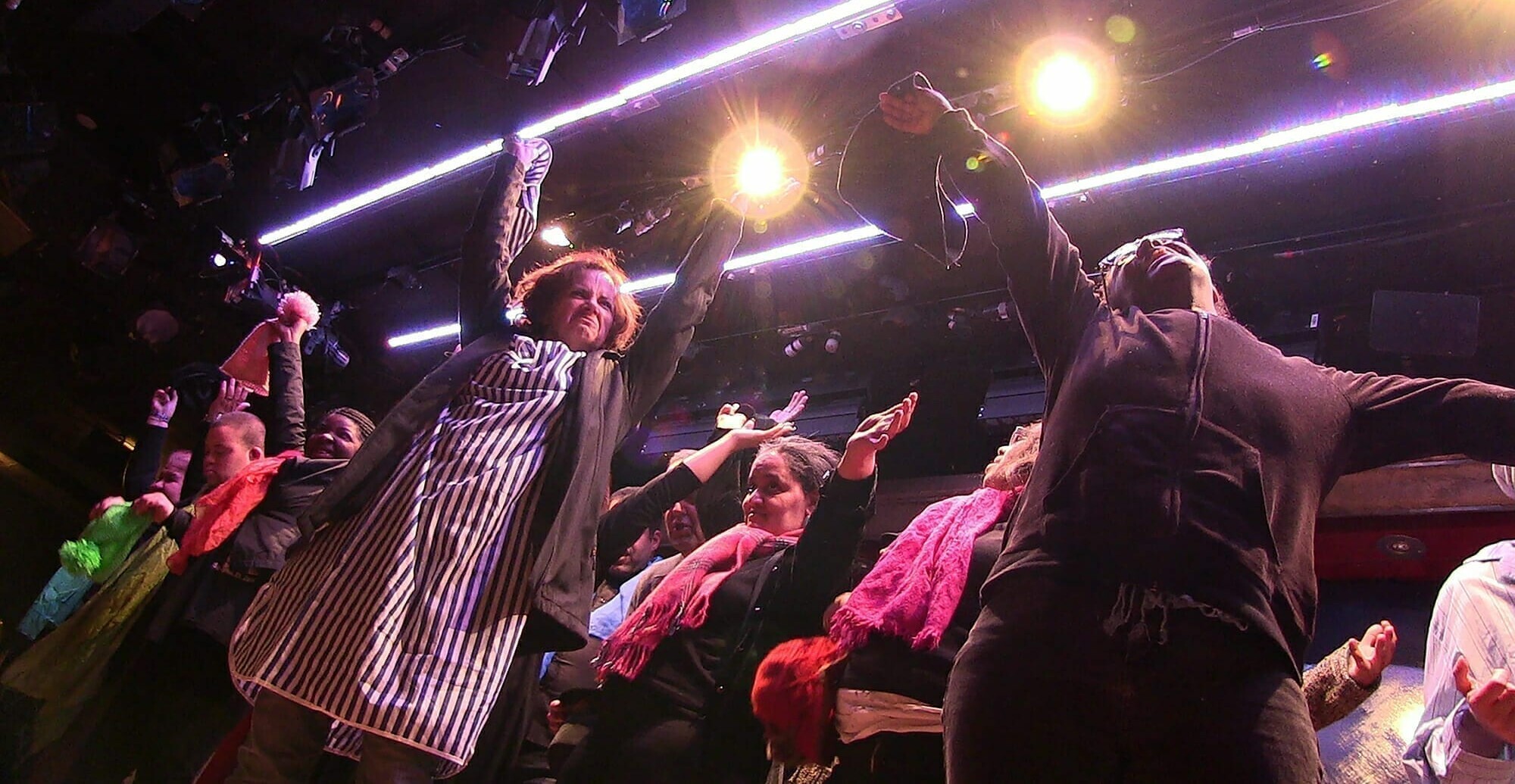 The collaboration between performers with disabilities and Broadway professionals has had positive benefits for both groups. “It’s a great journey and wonderful to work with lovely Broadway people,“ said Robert Rivera, who sings a solo song in the holiday production. “It’s important to me that people know what I’ve been doing.”

The holiday performances also featured two young actors from AHRC NYC’s Brooklyn Blue Feather Elementary, (BBF,) Allen Williams Jr. and Marcus Gak, who each play the role of young Ebenezer Scrooge during the musical. “The show was fantastic with many talented actors,” said BBF Principal, ZoeAnn Deeds. “Our students’ parents cried with happiness. Thank you for letting us be a part of it!” 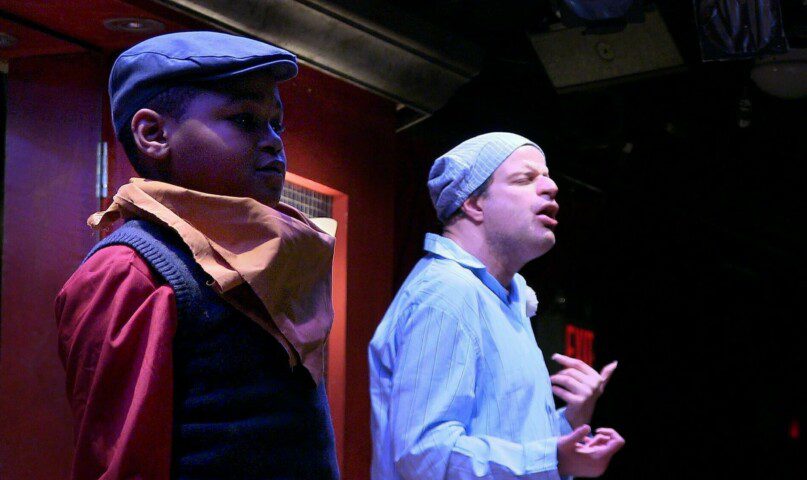 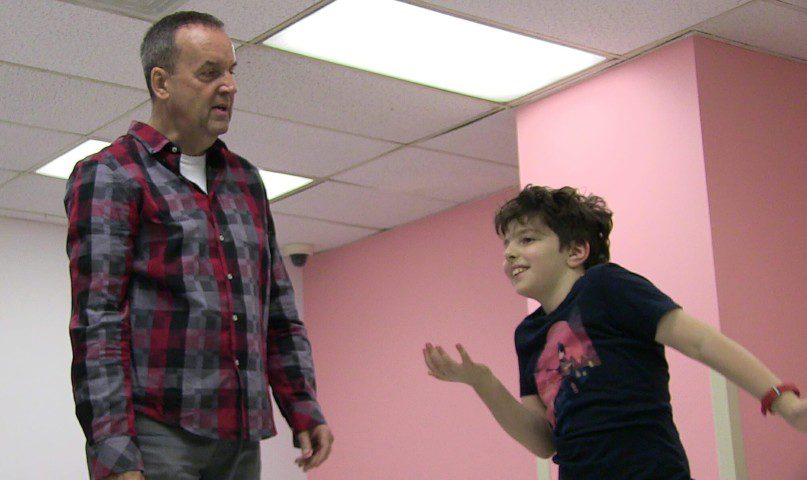 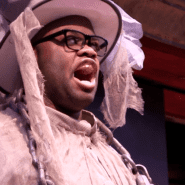 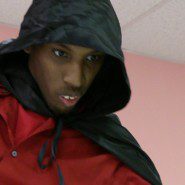 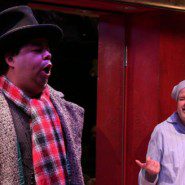 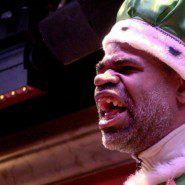 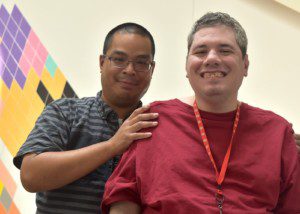 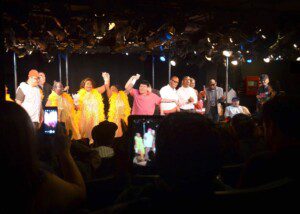 You’ve Gotta Have Heart: The Redfield Center on…