A New Era: The Arc New York’s Fall Board of Governor’s Meeting

The Arc New York (formerly NYSARC, Inc.) held its first Board of Governors Meeting under its new brand from Thursday, October 26th through Saturday, October 28th, 2017. Two representatives from AHRC New York City were honored as a part of the meeting, which was held in Saratoga Springs. Other highlights included a new executive director named for The Arc New York, a well-received keynote speech, and inventive displays of art from statewide chapters.

At Friday’s Award Luncheon, Donatella Horvath, Senior Medicaid Service Coordinator, Family and Clinical Services, was one of four recipients of the Thomas A. Maul Direct Support Professional Excellence Award. Donatella has worked for AHRC NYC for over 18 years. 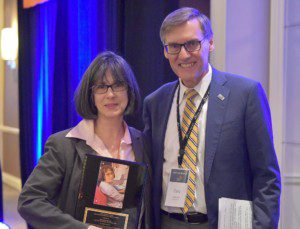 “Donatella has consistently demonstrated excellence, leadership, creativity, and commitment to the people we support,” Gary Lind, Executive Director, AHRC NYC, said. “She’s the one who advocates for our folks getting in the best hospitals in New York City, seeing the best specialists, getting in the right rehab facilities, and she so wonderful at doing that, and it’s so greatly appreciated.”

“I really appreciate this award,” Donatella said. “As I told my coworkers when I was nominated for this award, this is not about me. This is a team effort, and that’s how we do things. I always just strive to do my job.”

Later on Friday at the Banquet Dinner, Edith Niedert was named Volunteer of the Year. Edith has been on AHRC NYC’s Board of Directors for 36 years and has been exceptionally dedicated to improving the lives of people with developmental disabilities, including her son, Paul. 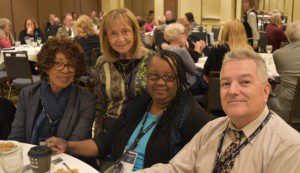 “Edith knows our history and has lived it,” said Laura J. Kennedy, President of The Arc New York and a longtime Board colleague of Edith’s at AHRC NYC. “Edith was always empathetic and supportive of those in need and in crisis. Her role as a family member the most important role she plays in this organization.”

Edith was unable to receive the award in person, so Gail Fishkind, AHRC NYC Board Member, accepted it in her stead. “Edith has always been a voice of reason and caring, especially for Paul. I know Edith would cherish this award,” Gail said.

Other DSPs that received the Maul Award were Edmund Schufelt from Schenectady ARC; Jo Livermore from Arc of Seneca-Cayuga; and Vicky Worthington from Arc of Jefferson County. Scott Kamakaris from The Arc of Livingston-Wyoming received the Self-Advocate of the Year Award.

Thursday evening’s keynote speech was delivered by the energetic and self-deprecating Dr. Stephen Birchak, aka Dr. Bird, who is a professor of psychology at the College of Saint Rose in Albany and an author. His presentation focused on positive approaches to stressful everyday situations and was peppered with inspirational quotes and personal anecdotes, especially regarding his son Nicholas, who passed away at age 27 after years of suffering from epilepsy and other health challenges.

“We stack the odds against ourselves because we’re convinced the answers cannot be within ourselves,” Dr. Bird said. “Self-worth is the greatest tool you will carry around.”

At Friday’s Board of Governors Meeting, Mark van Voorst, who previously worked at Lifespire for 16 years, was formally recommended as the next Executive Director of The Arc New York.

Shannon Hutton, The Arc New York’s Associate Executive Director of Communications, stressed the importance of brand unification with the national Arc organization. She also highlighted key federal legislative initiatives, including the upcoming Republican budget and tax bill and its potential cuts to Medicaid; support for the Lamar Alexander-Patty Murray health care legislation in the Senate; and ensuring renewal of the Children Health Insurance Program (CHIP). 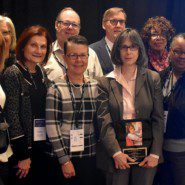 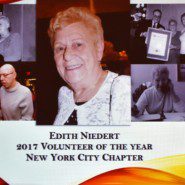 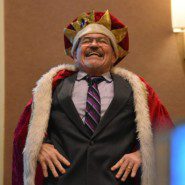 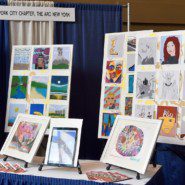