Following an over 40-year career at AHRC New York City, Suzanne Caiazzo-Gold, Associate Director of Day Services is retiring. As she prepares for a new phase in her life, dozens of people from her department joined together to honor Suzanne’s work by showing her the same warmth and love she has provided for years, through an extravagant musical production entitled Ciao, Suzanne!, held at the Jerry Orbach Theater on July 27th, 2018, 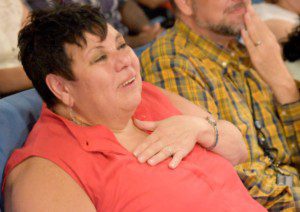 “She’s been an inspiring person in every creative process,” said Darinka Vlahek, AHRC NYC’s Director of Curriculum and Community Supports. “Because of Suzanne, so many people have been able to explore their talents and become accomplished artists, all due to her passion.”

The show began with the actors from AHRC NYC’s Our Broadway, singing the Weil/Mann classic, “On Broadway,” followed by a selection from New York League’s recent staging of Beauty and the Beast, and a Barbra Streisand cover performed by Cyril Weinberg Day Services’ resident showman, Arthur Fairchild. Other musical performances included show director Dale Hensley, Art Consultant, and David Taylor singing a duet with “Me and My Shadow.” Broadway guest stars joined in, performing the songs, “The Schuyler Sisters” and “Steam Heat.”  Thomas Gambaro of Kings Highway Day Services debuted an original song during the event.

Art Consultant, Dale Hensley performs Me and My Shadow with David Taylor

Throughout the show, a number of people took to the stage to personally express how Suzanne has inspired them over the years.

“Suzanne, your retirement has made everyone value you even more,” said Gilda Lindenblatt. “It made us appreciate the way you strengthened our cores. You are not just retiring from your post, position, or role. You are retiring as a teacher who inspired our souls. Goodbye, farewell, and don’t forget about us.”

“Suzanne was a co-pioneer in the opening of several Brooklyn programs with the open-space design, including our program,” Rolando Gonzalez, Community Support Supervisor at Wendy M. Siegel Day Services, said. “Suzanne fiercely promoted person-centered excellence, community integration, and a caring community. With Suzanne’s guidance and unrelenting support, program staff members were able to realize the goals, dreams, and hopes of people receiving services.”

Prior to the grand finale, Natale Miceli from Walter and Evelyn Redfield Day Services invited Suzanne on stage to dance as he sang Dean Martin’s classic “That’s Amore.”  The whole audience broke out into song as the two waltzed their way across the stage.

“Suzanne and I have worked since 1975 together, ” Harriet Golden, Director of ADS, said. “I have to say that if you asked Suzanne and me what bound us together, it is the impact on the lives of everyone in this room. You gave us life, you gave us people to love people to care for, and I can’t tell you what that’s done to both of us.”

After another singalong, appropriately being “Happy Trails,” Suzanne was then given an opportunity to say a few words.  “When my son was born, I stayed home for two years,” she said. “When I went back to one of the programs, I remember I was waiting for that director to come down and talk to me. As I was sitting the people from that program started to come in. That had to be the happiest moment of my life, and I knew I was home and that it was where I should be. It’s going to be very hard for me not to be a part of this, but you will always, always be in my heart.” 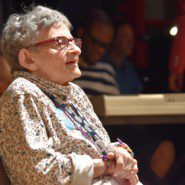 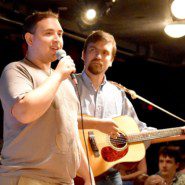 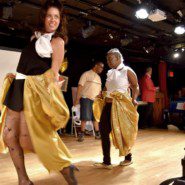 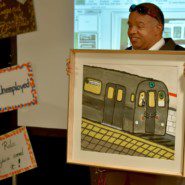