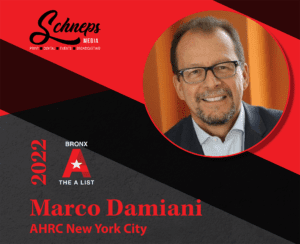 As reported in Bronx Times, Marco Damiani, CEO of AHRC New York City was one of  40 men honored on Schneps Media’s Bronx A List during an event held at Maestros Caterers in the Van Nest section of the Bronx on April 28th.

Schneps Media’s Bronx A LIST recognizes the achievements and contributions of the Bronx extraordinary men at the pinnacle of their careers. These men have created a significant impact in their fields.